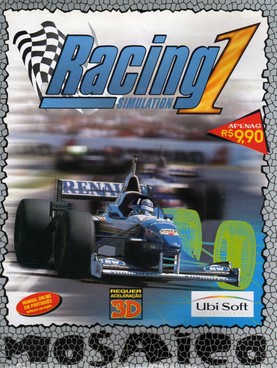 F1 Racing Simulation is a racing simulation game, developed for Microsoft Windows by Ubisoft in 1997.

The game is based on the Formula One 1996 Season.

The game received "favorable" reviews, two points shy of universal acclaim, according to the review aggregation website GameRankings. GameSpot said: "F1 Racing Simulation is an extremely well-thought-out simulation with drivers of all abilities in mind."

Next Generation reviewed the PC version of the game, rating it four stars out of five, and stated that "The only area in which the game suffers in comparison to Formula 1 Championship Edition is that the FOCA license obtained for the game is for the 1996 season and thus features the drivers and tracks from two years ago. For die-hard racing enthusiasts this is an important point, but for the more casual gamer, rest assured that the graphics and gameplay elements of F1 Racing Simulation more than make up for this lapse."

F1 Racing Simulation was a finalist for Computer Gaming World's 1998 "Best Driving" award, which ultimately went to Need for Speed III: Hot Pursuit. The editors wrote, "In a less competitive year, UbiSoft's excellent F1 Racing Simulation would have won hands down." PC Gamer US likewise nominated F1 as the best racing game of 1998, although it lost to Motocross Madness. They wrote of F1, "Lip-smacking graphics, a solid physics model, and a full-featured garage for adjusting your vehicle are combined into a package that delivered the goods in a major way."

F1 Racing Simulation received a "Gold" award from the Verband der Unterhaltungssoftware Deutschland (VUD) in August 1998, for sales of at least 100,000 units across Germany, Austria and Switzerland. In the United States, F1 Racing Simulation was a commercial failure, with sales of 12,570 copies by April 1999. Discussing this performance, Ubisoft's Tammy Schachter argued that "the install base of 3D cards was not in place for mass-market sales" when the game launched. She also cited the relative unpopularity of the Formula 1 sport in the United States.