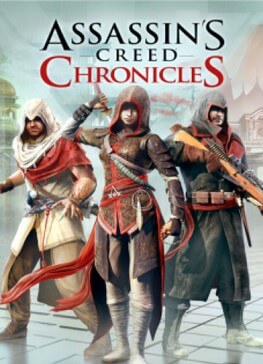 Assassin's Creed Chronicles is a series of video games in the Assassin's Creed franchise. The series consists of three games developed by Climax Studios and published by Ubisoft. The games feature new protagonists and a design that is new to the franchise, a 2.5D world inspired by traditional brush paintings. The first entry, China, was released on April 21, 2015, on Microsoft Windows, PlayStation 4 and Xbox One. The second entry, India, was released on January 12, 2016 on the same platforms. The last game, Russia, was released on February 9, 2016.

The games are 2.5D side scrolling platformers. The games feature a large array of weapons such as secret shoe blade, rope darts, and daggers. Players must control the protagonist, and navigate through the environment. Players can use stealth tactics such as hiding from enemies in shadows and can climb areas that are highlighted with more color.

China takes place after the short film Assassin's Creed: Embers. The game takes place in 1526 China and focuses on the female protagonist, Shao Jun. After being trained by legendary Italian assassin Ezio Auditore da Firenze, Shao Jun returns to her homeland to exact vengeance against the Templar group Eight Tigers, who wiped out the Chinese brotherhood. Shao Jun's quest takes her through Macau, Nan'an, the Forbidden City and the Great Wall, as she kills the Tigers one by one and finally assassinates the final target, Zhang Yong. Years later, Shao Jun, who becomes an Assassin Mentor and has rebuilt the brotherhood, plots the assassination of Jiajing Emperor by sending him an elixir of life, which is actually lethal mercury. The episode has 12 levels.

India takes place in 1841 India and features the male protagonist, Arbaaz Mir from graphic novel Assassin's Creed: Brahman. While the Sikh Empire was at war with the East India Company, a Master Templar arrives with a mysterious item that used to belong to the Assassin Order. Mir must discover why he has come, steal back the item, and protect his friends and his lover. Some of the weapons introduced are a typical Mughal and Sikh sword resembling an Aruval, Urumi, a concealed Katara with Bagh naka, and Chakram, smoke bombs for stealth and distraction. A Slingshot with rock pellets has also been added.

Russia takes place in 1918 Russia during the aftermath of the October Revolution and features male protagonist Nikolai Orelov from comic book Assassin's Creed: Subject Four. Orelov wants to leave with his family, but is required to perform one last mission for the Assassin Order: infiltrate the house where the Tsar's family is being held by the Bolsheviks, and steal an artifact that has been fought over by Assassins and Templars for centuries. Along the way, he witnesses the massacre of the Tsar Nicholas II's children, but manages to save the grand duchess, Anastasia, who shares Shao Jun's memory. He must escape the Templars while protecting the artifact and Anastasia. Nikolai uses a custom Berdan rifle fitted with a bayonet which can be used for melee combat with sniping capabilities, and a grapnel gun that can also produce electricity in order to short out electricity boxes, spotlights, lamp posts or kill unsuspecting enemies standing on water puddles. Anastasia also becomes a playable character with unique set of skills, including the Helix Blade.