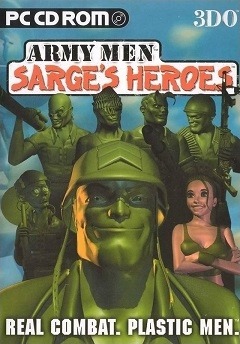 Army Men: Sarge's Heroes is a third-person shooter video game developed and published by The 3DO Company for Nintendo 64, PlayStation, Dreamcast and Microsoft Windows. The player normally controls Sarge, a Sergeant in the Green Army and fights evil General Plastro and the members of the Tan Army. Both armies are named after the usual colours of toy army men. The game's storyline is somewhat dark, partly because of General Plastro's killings.

There are two modes for single player: Campaign and Boot Camp.

Campaign is the main mode of Sarge's Heroes. The player plays as Sarge, the protagonist for many of the Army Men games. The player travels through several missions, completing objectives, killing enemies, destroying vehicles, and rescuing people. The plot starts out as the Tan Army is invading the Green Army base. Sarge rescues Colonel Grimm and they evacuate the base in a helicopter. In the game, Sarge discovers portals that lead from the "plastic world" to the "real world". The Tan Army is getting "Weapons of Mass Destruction" from the "real world" (toys and ordinary objects, e.g. magnifying glass). Throughout the game, Sarge rescues commandos of his own unit, Bravo Company. Sometimes they are in Tan bases, and other times he has to go through portals and save them from the "real world". To avoid the destruction of the Green Army, Sarge must destroy the portals and stop Plastro.

Boot Camp is a training level in which the player learns the controls. Boot Camp consists of training areas for all weapons, an obstacle course, and a "live fire course" in which Sarge is shot at.

The Dreamcast version contains differences from the PlayStation, Nintendo 64 (the Dreamcast version is actually the N64 version with enhanced graphics, voice acting and music) and Windows versions. It was developed instead by Saffire Corporation and published by Midway. By entering the cheat "SFFRMV" in the Dreamcast version you can view a short "Making Of" film. It also contains a plethora of extra characters such as a fluffy pink bunny, a little girl, a skeleton as well as the faces of many of the games developers.

In 2-4 player multiplayer (only 2 players in the PlayStation and PC), players choose their character, faction, and difficulty. Players then select a map. The players fight each other until the number of preset required kills to win is reached.

The game was met with mixed to negative reception. GameRankings and Metacritic gave it a score of 61.76% for the Nintendo 64 version; 55.50% and 60 out of 100 for the Dreamcast version; and 49.22% for the PlayStation version.