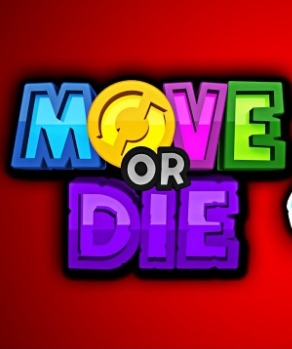 Move or Die is a competitive four-player game in which each player controls one colored blob whose health drops rapidly if they stop moving for a moment, and regenerates if they resume movement. Different rules or modifiers are added in each round, with additional failure states varying between modes. The challenge arises from requiring players to keep moving to win, while avoiding hazards such as death tiles or falling blocks. Players can also attempt to push each other around, including into hazards.

On review aggregator Metacritic, Move or Die has received "generally favorable" reviews. Hardcore Gamer scored the game 4.5 out of 5, praising its simplicity and multiplayer gameplay, calling it "quite possibly one of the best party games on Steam".