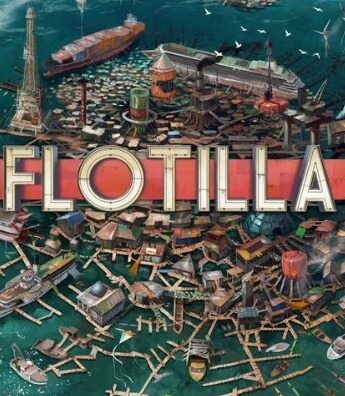 Flotilla is a 2010 turn-based strategy space combat video game developed by Brendon Chung's studio, Blendo Games. The game was released in March 2010 on Steam for Microsoft Windows and on Xbox Live Indie Games for the Xbox 360. Flotilla was designed with Microsoft's XNA tools, and its development was influenced by animals as well as board games such as Axis and Allies and Arkham Horror. The game takes the player in an adventure through a randomly generated galaxy.

Chung began developing Flotilla immediately after the closure of Pandemic Studios, where he had worked as a designer. The new game used assets imported from Chung's early space combat prototype, Space Piñata. Flotilla incorporates several pieces of classical music in its score, such as Chopin's "Raindrop" prelude. It received mixed reviews from video game media outlets, scoring 72 out of 100 on review aggregate website Metacritic, and was included in Mike Rose's book 250 Indie Games You Must Play.

Flotilla is a three-dimensional simultaneous turn-based strategy space combat video game set in a randomly generated galaxy. The player and computer-controlled opponents issue orders to their ships, which are carried in a simultaneous and real-time fashion over a period of 30 seconds. The game then freezes, and the player and opponents issue new orders to their ships, which are again performed for 30 seconds. This process repeats until one party is defeated. Orders are separated into three groups: attack move, flank move and focus fire. An attack move orders the ships to move and fire simultaneously; a flank move increases the ship's speed but deactivates weapons until the ship stops moving; and focus fire increases fire rate but significantly reduces the ship's speed.

At the beginning of the game, the player is usually given two ships to control, but more become available as the game continues. Ships may be rotated arbitrarily in any direction.:2 The single-player mode is an "adventure" that can be played an indefinite number of times. These adventures have a duration of around 30 minutes. The character dies at the end of each adventure and the player is given the option to play again.:2 A hardcore mode, which removes the solo mode's standard 30-minute time limit, was later added to the game. Each time the player starts a new adventure, a new galaxy is randomly generated and filled with planets and enemy ships. The player may take a short tutorial before beginning the adventure.

Each planet offers a possible quest or challenge to the player. Challenges are tactical battles in which the player must fight against a variety of enemies. However, ships can only be harmed from behind or below; attacks from any other position will be countered by the ships' shields. Upon succeeding, a new chapter is added to the player's character's story, and the player is rewarded with ship upgrades. These upgrades are used to customize ships with improvements, such as increased firing speed or heavier rear armor. The upgrades available to the player upon finishing each encounter with an enemy can vary, so the player may not receive the same upgrade by playing the same encounter in two different adventures. Flotilla has cooperative and split-screen multiplayer modes that can be played with an additional Xbox 360 controller.

Flotilla was developed by Brendon Chung's video game studio, Blendo Games. Chung, who worked as a level designer for Pandemic Studios, previously contributed to the development of Full Spectrum Warrior (2004) and Lord of the Rings: Conquest (2009). Chung started coding Flotilla in 2009 after Electronic Arts closed Pandemic Studios. He was excited at the time of the studio's closure, and stated that "there was adrenaline pumping through my veins". The game was developed using Microsoft XNA, a set of game development tools created by Microsoft.

The concept of Flotilla came from a combination of "sci-fi like Star Wars and submarine movies". Chung explained that he "figured there was enough games about little fighter jets", and that what he had in mind was "a jumbo battleship floating in space". Animals, instead of aliens, are featured as characters in the game. Chung explained that he did so because "any fantastical creature design I came up with would pale in comparison to already-existing designs made by other people." Therefore, instead of trying to solve the problem of creating compelling alien characters, he switched to animals: "they have certain built-in characteristics, they were fairly unique in how they weren't typically associated with space adventures." In an interview with SquareGo, Chung revealed that board games such as Axis and Allies and Arkham Horror had an influential role in the game's development process.

Before Flotilla, Chung worked on a prototype, a two-dimensional turn-based space action game called Space Piñata, whose gameplay and structure were similar to those of the final version of Flotilla. Chung intentionally limited the solo mode's play time as an "experiment in making a short-story generator", such that an adventure could begin and end within a half hour. Following negative response, a patch was deployed to change this limitation. The patch included a new "hardcore" mode. Flotilla's score incorporates several pieces of classical music, such as Chopin's "Raindrop" prelude. According to Edge magazine, the "Raindrop" prelude gives the game's battles "an emotional undercurrent". Chung said that the soundtrack was designed to give the game "a tragic feel" and that he wanted the game to be portrayed as "the anti-testosterone-fueled" action game.