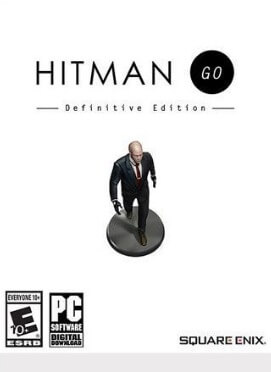 Hitman Go is a turn-based puzzle video game developed by Square Enix Montreal and published by Square Enix. Announced in February 2014, the game was released for iOS in April 2014 and for Android in June 2014. Windows and Windows Phone versions were released the following year in April 2015. In February 2016, a "Definitive Edition" version was released on PlayStation 4, PlayStation Vita, and on Linux and Windows via Steam. It is the first game developed by Square Enix Montreal, a studio founded in 2011. Development entered full production in 2013 and was completed by eleven people using the Unity game engine.

The player guides Agent 47, protagonist of the Hitman franchise, through a series of grid-based levels. Levels are composed of nodes and lines, and presented like a board game with characters modelled as miniature figures. Enemy characters can be dispatched by moving onto the node they occupy during a turn, similar to chess. As the player advances through levels, new enemy types and mechanics are introduced to increase the complexity of puzzle solutions.

Following its announcement, Hitman Go was met with some scepticism from critics. However, upon release the game received a positive reception with praise directed towards the game's art, aesthetics, simple gameplay mechanics, and translation of Hitman to a mobile device. The game also received several nominations and awards from gaming publications and award organisations. A successor set within the Tomb Raider franchise, titled Lara Croft Go, was released in August 2015.

Hitman Go is a turn-based puzzle video game part of the Hitman video game series. In the game each level is set on a grid-based board composed of interconnected nodes and lines. Nodes are positions that the player or enemies can occupy and lines are used for moving between nodes during a turn. Players take control of the series' protagonist, Agent 47. Using touchscreen controls, during a turn the player swipes along a line in the direction they want Agent 47 to move.

Levels become more complex as the player progresses, introducing different mechanics and new types of enemies. Each enemy type is dressed in a unique colour, allowing the player to recognise their movement patterns. Some enemies remain static or rotate on a single node, while others will patrol the board along a specific route. Later stages may require the player to collect keys located on the board and unlock doors that block access to the level objective. Trapdoors connect one location on the board to another and allow the player to move between them during a turn. Some nodes contain potted plants, the player will not be detected while occupying these nodes. Coloured disguises can be found and equipped to let the player walk past an enemy type of that colour without being detected. There are throwable objects that are used to disrupt and change enemy behaviour patterns. Firearms can also be found on certain levels, they are used to shoot targets or obstacles from a distance.

Most levels have bonus objectives such as collecting a briefcase or finishing the level without killing anyone, completing these will reward the player with stars. Stars are used to unlock the next chapter of levels. The game launched with five different chapters, one of which was inspired by a level from Hitman: Blood Money. Post-launch, two additional chapters were added, one based upon a level from Hitman 2: Silent Assassin. The game features in-app purchases which provide hints to the puzzles or unlock level chapters immediately.

Hitman Go received "generally favorable" reviews from professional critics, according to video game review aggregator Metacritic. Several reviewers noted that they were sceptical about the idea of Hitman departing from its roots in third-person stealth action and taking form as a mobile puzzle game, but upon playing the game admitted that it was a pleasant and creative take on the franchise.

The game's visual presentation and board game aesthetic were widely praised. Joystiq editor, Anthony John Agnello thought the colouring and motif of Hitman Go was more appealing than the visual design employed in Hitman: Absolution. He highlighted the level selection screen and use of board game boxes in the menus as positives. Writing for Destructoid, Brittany Vincent also expressed approval of the clean menus and user interface icons, and thought that the game levels resembled dollhouses. Eurogamer and IGN writers compared the character design to miniature board game pieces. The simplicity of the gameplay mechanics and minimalistic approach were praised by Polygon reviewer Arthur Gies. He believed that Hitman Go brilliantly captured and expressed elements of the series through the use of a sophisticated board game. Joystiq reviewer, Agnello called Hitman Go an impressive debut title for Square Enix Montreal and said that the play style suited touch-based devices. Reviewers complimented the replay value and challenge found in completing the additional bonus objectives.

One aspect of the game's design that drew criticism was that limitations of the grid system had led to a lack of paths available to complete a level. While Gies of Polygon thought that the mechanics of distraction and murder had been interpreted well in the board game setup, he was disappointed that some levels could not be completed without killing non-target guards. Vincent of Destructoid also shared this opinion, disappointed that an element core to the Hitman series had been stripped away. Both Eurogamer and IGN writers thought that the in-app purchases were overpriced but remarked that they could be easily ignored when level solutions are so regularly shared on the Internet. Reviewing the "Definitive Edition", Phil Savage of PC Gamer stressed that the PC version failed to cover up its mobile roots. He found the click and drag mouse interaction to be less than ideal but still complimented the game's aesthetics and gameplay. GameSpot writer Mat Paget was left dismayed with the VR version of Hitman Go. He felt that the game failed to offer the escapism he expected from a virtual reality game. While he admitted the game itself was excellent, he dissuaded readers from purchasing the VR version remarking that it was not worth the hassle.

All games from the serie "Hitman"