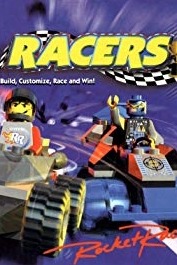 Lego Racers is a Lego-themed racing video game developed by High Voltage Software and published by Lego Media. The game was released on July 31, 1999, for Microsoft Windows, on October 12, 1999, for the Nintendo 64, on December 17, 1999, for the PlayStation and on December 29, 2000, for the Game Boy Color.

Set in the fictional "Legoland" universe, the single-player mode follows various minifigure characters competing in a racing competition created by a fictional racing champion called Rocket Racer. Players control a minifigure, allowing them to drive a variety of cars built out of Lego and race them against other minifigure characters. Items can be used by the player to hinder other racers' progress, and the player can create their own cars and characters with unlocked Lego bricks and use them to race. A local multiplayer mode also allows multiple players to race against each other.

Originally conceived by High Voltage founder Kerry J. Ganofsky, creative expertise from The Lego Group assisted High Voltage in the game's development after Lego Media agreed to begin production. It received mixed reviews from critics, who were divided on the game's graphics, construction system, driving gameplay and other design aspects. Two sequels developed by Attention to Detail, called Lego Racers 2 and Drome Racers, were released in 2001 and 2002, respectively.

Lego Racers is a racing game played from a third person perspective. Set in the fictional Legoland universe, the game depicts Rocket Racer, the "greatest racing champion" in Legoland. After becoming bored from beating everyone at racing, he decides to create a racing contest, and finds the best racers in the history of Legoland using a dimensional warp machine created by his friend, Veronica Voltage, a genius scientist and mechanic. The player takes on the hosts and co-racers in an attempt to beat Rocket Racer and become the "Greatest Lego Racer of All Time", completing the game.

Players assume the role of either one of several pre-built or custom-built minifigures and compete against other minifigure characters in races set across different tracks in the Legoland universe, using a variety of cars built out of Lego. At the beginning of each race, the player can perform a "Turbo Start", which allows the player to start the race at full speed. Throughout races, the player can also perform power slides and "Super Slides", which allow the player's car to turn around corners more sharply.

Each of the game's tracks contain power up bricks, which can be collected by the player and used to gain an advantage over other racers. The power ups are divided into four categories: Projectile, Hazard, Shield and Turbo, with each providing a different use to the player. The player can also collect up to three "power plus" bricks, which increase the capability of any power ups collected. Most tracks contain one shortcut that players can use to get ahead of opponents, which are usually either found with careful looking, or accessed using power-ups, mainly Projectile power-ups that destroy part of the scenery. During a race, the in-game HUD displays the player's position, lap number, "lap timers", and a "Power Up Icon" if the player is carrying any power up or power plus bricks. The player can also choose between viewing the "Speedometer", the "Course Map" or the "Close-up Map".

The game contains three single-player modes: "Circuit Race", "Single Race" and "Time Race", as well as one multiplayer mode, "Versus Race". The Circuit Race mode follows the game's main plot, and allows players to race through circuits made up of multiple tracks, gaining points based on where they place, while contending with a highly skilled racer who leads each circuit. In a circuit, the player must earn enough points to move on to the next race, and will win if they finish with the most points. Placing third or above in a circuit unlocks the next circuit for the player. The Single Race mode allows the player to race on a single track unlocked from the Circuit Race mode. The Time Race mode places the player in a race against Veronica Voltage driving a ghost car with the aim of beating her best time around a track chosen by the player. Versus Race allows two players to race against each other in a split screen view without non-player character minifigures on the track.

Throughout the game, the player can unlock various brick sets and character pieces by completing certain tasks, such as coming first in a Circuit Race. The game's "Build Menu" allows the player to build custom cars, minifigures and driving licenses of their own design using unlocked bricks and character parts. Minifigures can be customized with different hat, hair, head, body and leg parts, and given a name entered by the player on the minifigure's driving license. A picture of the player's minifigure is also placed on their driving license, and their facial expression can be changed by the player. The player can create a custom car using a combination of different chassis and car sets. The player can rotate, move and place bricks from these sets directly on to the chassis. Placement of the bricks changes the car's balance and weight, which affects its overall performance. The "Mix" option creates minifigures from randomly selected parts, while the "Quick Build" option creates one of 2 presets for a specific chassis.

The game's graphics were generally praised by critics. GameSpot's Andrew Park stated that virtually everything in the PC version "looks bright, colorful and clean" when playing in 3D-accelerated mode, but called its texturing minimal. GameSpot's Ben Stahl also called the N64 version's track design "innovative and cute", as well as saying the tracks and backgrounds have a "somewhat real look" that makes it easier to tell where the player should be driving. IGN's reviewer for the PC version praised the game's background animations, stating that they not only "add to the atmosphere of the game, but also affect the way it plays". However, some reviewers criticised the game's performance, with IGN's Sam Bishop stating that the PlayStation version's load times between levels are horrendous and Next Generation's Chris Charla calling the N64 version's framerate "nauseatingly slow". Conversely, IGN's Winnie Imperio called the N64 version's framerate "consistent, if not entirely smooth".