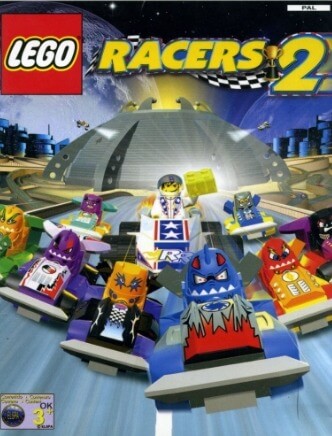 Lego Racers 2 is a Lego-themed racing video game developed by Attention to Detail, published by Lego Software and distributed in North America by Electronic Arts. It was first released in September 2001 for Microsoft Windows, PlayStation 2 and Game Boy Advance. It is the sequel to the 1999 game Lego Racers. This sequel was first revealed by Lego Software on August 20, 2001.

After getting defeated in the first game, Rocket Racer is shown a new opportunity to reclaim his title as world champion, by travelling to Xalax and prove himself worthy of it. After Rocket Racer proceeds to do so and succeeds, the player is tasked to control their self-built protagonist, racing through various worlds based on Lego themes, and eventually face Rocket Racer again.

There are five large worlds, starting with the hometown, Sandy Bay. The player wins 4 races in Sandy Bay, then collects gold bricks to move on to Dino Island, Mars, Arctic, and finally Xalax. In Xalax, the player will face Rocket Racer, who when beaten, will hand over the title as the greatest racer in the galaxy.

Each world is based on a particular theme. In addition to racing cars in the Racers product line, each theme is based on an actual series Lego sets, and includes parts of those sets.

Upgrades for players' car may be obtained by winning mini games. Each mini game is accessible by driving through a vortex while exploring the Lego worlds. There are two mini games per world, one on an easy level and one on a difficult level. The first vortex players go to will be the easy level.

Powerups are various types of weapons that can be used while racing. Players obtain a powerup by driving over a white, spinning, glowing Lego brick. A counter appears that cycles through all of the powerups; the one it lands on is the one players get. Players may press the "fire" button to stop the counter. Otherwise, the counter will automatically give players a bonus based on their position in the race. Persons in last place will receive the best powerups. Unlike Lego Racers 1, there are no power-enhancing bricks for their powerup.

Lego Racers 2 was rated average to positive. The PC version was given a score of 7.8 out of 10 by IGN; the reviewer praised its graphics and gameplay, but criticized the voice and talk which were derided as "cartoon gibberish". IGN rated the PS2 version only 6 out of 10, which corresponding graphics and gameplay were inferior to its PC counterpart. An additional note is that a copy cost $20 for PC, but $40 for PS2; the reviewer thought the latter to be poor value for money, while the PC version, at half the cost, was acceptable.

Electronic Arts, which signed a contract with Lego Software (formerly Lego Media, later renamed to Lego Interactive) to co-published their titles in December 2001, revealed their line-up for E3 2002, again held in May, which firstly covered Drome Racers (known in development as Lego Racers 3), a successor to the Lego Racers series, again developed by Attention to Detail. Microsoft Windows and PlayStation 2 versions of the game were shown at E3 and ECTS. The game did not pick up the story of either of the two predecessors, and focused more heavily on tracks based around Lego Technic kits, rather than various themes. The game was released in November 2002, but to lesser acclaim. The game was panned by critics who thought that the game was lacking features that were essential to the first two games, such as building your own driver and vehicle from Lego bricks, though others considered Drome Racers to be its own title outside the Lego Racers, and present a solid gameplay and visual appeal individually. Attention to Detail went into liquidation on August 28, 2003, just shortly before the release of Drome Racers' port to GameCube.