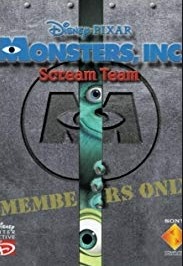 Monsters, Inc. Scream Team (released as Monsters, Inc. Scare Island in Europe and Monsters Inc. Monster Academy in Japan) is a platform game published by Sony Computer Entertainment for the PlayStation, Microsoft Windows and PlayStation 2 based on the 2001 animated film Monsters, Inc.. It was released in the United States in 2001 and in the PAL region in 2002. In 2011, the game was made available on the PlayStation Store for download. The game received mixed reviews.

This 12-level game begins after completion of an orientation program hosted by Roz, who shows the monsters the basics of their training. The levels are divided among three training grounds located on Scare Island. With names hinting at the nature of their design, the Urban Training Grounds, Desert Training Grounds and Arctic Training Grounds contain four areas to be explored. Each region ranges in scenery from a city park to a frozen lake, and players can choose to play as either Sulley or Mike, with each monster having different moves and scare abilities.

The objective of the game is to successfully scare all the robot children (known as "Nerves") on the island and graduate from monster training with top honors. This is accomplished by collecting bronze, silver and gold medals that are awarded throughout the game. The bronze medal can be obtained by scaring five Nerves on a level; the silver medal can be obtained by finding and collecting 10 "Monsters, Inc." Tokens scattered on a level; and the gold medal can be obtained by scaring all the 8 Nerves of a level. Obtaining the bronze medal in each sub-level of one training ground unlocks a hidden item that may help the player reach previously unreachable areas.

Items used include Extra Try Tokens (that gives extra lives to the player), Monsters, Inc. Tokens (that earn silver medals for every ten collected) and Primordial Ooze, which is the substance that gives the monsters their scare power. The random Bag O' Calories increases health, while mailboxes provide tips and information vital to the player's success. Nerves and items may be hidden, but can be discovered by searching in and around boxes and other objects.

Mike and Sulley try to get a job at Monsters, Inc. by going to Scare Island in order to train to become top scarers. Scaring human children serves the purpose of generating energy for the monsters' society. As explored in the movie, human children are believed to be highly dangerous, toxic, even. This is the cause for the game's setting being a simulation.

Information about the game was first released in August 2001 on the gaming website GameSpot.

According to Metacritic, the game received mixed or average reviews, with a score of 65 out of 100.