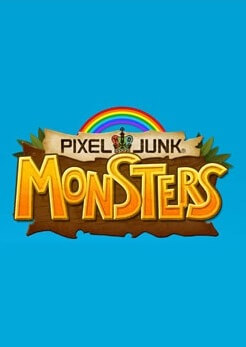 In May 2016, PixelJunk Monsters was released by Double Eleven for Wii U.

Gameplay in PixelJunk Monsters has similarities to various tower defense titles. The objective is to build defense towers along the enemies' path to keep them from reaching a hut, or base. Several small creatures dwell at the base. For each enemy that survives the defense towers and reaches the hut, one creature is killed. If all creatures are wiped out, the level is failed.

Towers have distinct attributes, such as rapid fire, long range, air-focused, etc. Destroyed enemies usually drop coins and occasionally give gems, which then can be used to upgrade and research new towers.

There are a total of 21 different levels (36 with the expansion pack) at 3 stages of difficulty. There are also 3 special stages that unlock unique abilities for the player character. Several "Trophy Challenges" were also added to the game after a patch.

Unlike more traditional tower defense games, the player controls a character around the screen, collecting coins and building towers. This replaces the standard cursor controls. A second player can also join in and assist in building towers.

The PixelJunk Monsters Encore expansion pack includes an additional 15 levels, including layouts inspired by classic arcade games such as Pac-Man and Space Invaders. There are also small tweaks to gameplay; for instance, the ice tower is unlocked at the beginning of every level and the Tesla tower is less expensive to purchase.

A new version of PixelJunk Monsters was available for the PlayStation Portable. Titled PixelJunk Monsters Deluxe, it has been described by Dylan Cuthbert as the "ultimate version" of the game. It contains all of the level content from the original game and its Encore expansion pack, as well as new levels, enemies, and towers. Additional music, videos, concept art, and other special features are also included.