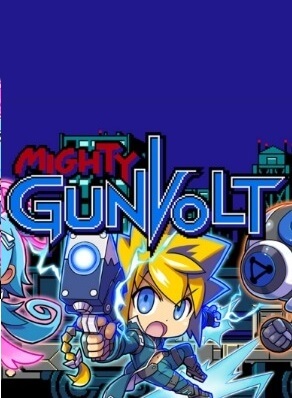 Mighty Gunvolt is a platform game developed and published by Inti Creates. The game is a spin-off accompaniment to Inti Creates' Azure Striker Gunvolt game, additionally featuring characters from Gal*Gun and Mighty No. 9. The game was released for the Nintendo 3DS in Japan and North America in August 2014, and later in PAL regions in April 2015. A port for PlayStation 4 and PlayStation Vita, titled Gal Gunvolt, was released in Japan in August 2015. A version of the original Mighty Gunvolt was released for Microsoft Windows, and was available for free to purchasers of Azure Striker Gunvolt within the first month of its release. A sequel, Mighty Gunvolt Burst, was released in June 2017.

Mighty Gunvolt is an 8-bit style platform game in the style of Mega Man, in which players shoot their way through five main stages (as well as additional stages available as downloadable content). Players can play as one of three characters; Gunvolt from Azure Striker Gunvolt, Beck from Mighty No. 9, and Ekoro from Gal*Gun, each with their own unique abilities. Gunvolt can perform a double jump and use a chargeable lightning attack, Ekoro can float in mid-air and convert certain enemies to her side, and Beck can use slides and tackles to access certain areas and charge through opponents.

Mighty Gunvolt was first released on the Nintendo eShop alongside Azure Striker Gunvolt as a free download for players who purchased the game, and was later released as a standalone title. A version update was released in November 2014, along with downloadable content containing four additional levels. A port for PlayStation 4 and PlayStation Vita, titled Gal Gunvolt, was released in August 2015, containing all downloadable stages.