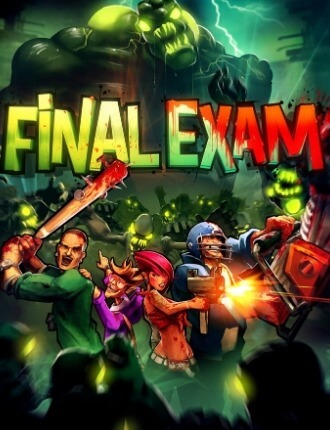 Final Exam is a side-scroller video game developed by Mighty Rocket Studio for Xbox Live Arcade, PlayStation Network and Microsoft Windows. Up to 4 players can work together to survive the outbreak. Many people compared the game as a 2D version of Resident Evil Outbreak or Left 4 Dead.

Initial pre-release feedback of the game was mixed. This was due to the fact that Mighty Rocket Studio was releasing a major change in the genre for Obscure. The negative feedback caused the developer to change the name of the game to Final Exam.

Upon full release, the game received "mixed or average reviews" on all platforms according to the review aggregation website Metacritic. Matt Beaudette of Hardcore Gamer said of the game, "There are better options available for those simply looking for a cheap sidescroller to play once and forget about. Those who can get invested in learning and mastering a deep combat system, however, will find a lot to like in Final Exam" Smooth Town wrote, "This is a fine starting point for whatever future holds for the ObScure franchise"; however, they noted the problems with repetitiveness and cheap boss fights.