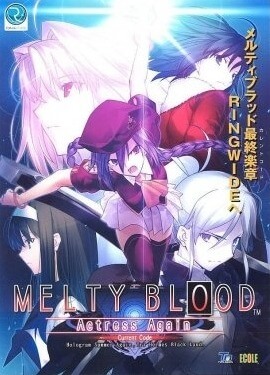 Melty Blood Actress Again Current Code is an arcade port of the PS2 version. The game underwent location testing in Akihabara from December 19–20, 2009. The characters formerly exclusive to the PS2 version of Actress Again became available for use, and the game runs on Sega's RingWide arcade system, as opposed to NAOMI like Act Cadenza and the original Actress Again.

The game's website was launched February 11, 2010, and after being unveiled officially at Japan's Arcade Operators Union show on February 20, 2010, the game began undergoing another two week round of location testing. Unverified reports stated that the price for the game and RingWide hardware would be ¥230,000 plus ¥100,000 for a RingWide Harness and shipping costs, equaling $3,560.83 USD at exchange rates as of May 13, 2010. Several arcade machine distributors showed the game as being pegged for a release on July 29, 2010.

Melty Blood Actress Again Current Code was released for Windows on 30 December 2011, along with the Blu-ray release of Carnival Phantasm Season 3 limited edition. It included an online multiplayer option and an online matching mode. The matching server was taken down on 10 October 2014; however, direct connection is still available. Four patches have been released, the latest one bringing the game to version 1.4.0. This version was made available on Steam, published by Arc System Works on April 19, 2016.