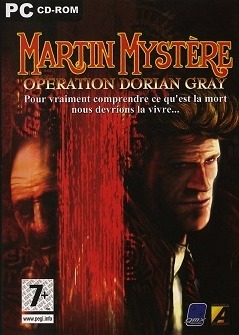 Martin Mystère: Operation Dorian Gray (known as "Crime Stories: From the Files of Martin Mystere" in North America), is the only video game adaptation of the Italian sci-fi detective comic-book franchise called Martin Mystère, starring a detective and his assistant, Java. It is a point-and-click adventure game, published in 2005 by The Adventure Company in North America and GMX Media in Europe. A Macintosh version was planned, but was cancelled in the evaluation stage. Versions for PlayStation 2 and Xbox were also planned, but were also cancelled.

The player assumes the role of a young FBI agent named Martin Mystere, who is currently investigating a brutal murder of a respected scientist named Professor Eulemberg.

The gameplay is standard for graphic adventure games: search for items in order to solve logic puzzles.

Development for the game began around 2002. Most of the time was invested on the storyboard, which was heavily based on the original comic strips of Martin Mystère. The models for the graphics started as layouts on paper. The models were output in Realtime 3D with octagonal views and pre-rendered backgrounds (Similar to Druuna: Morbus Gravis and Syberia) and animated with 3DS Max. The game uses Direct3D retained mode that has been discontinued by Microsoft so there is no compatibility with newer Windows systems.

Computer Gaming Magazine gave a scathing review describing the game as "tragic", adding that it was too over-enthusiastic. IGN deemed it "generic" and GameSpot called it "archaic". Game Chronicles thought the puzzles were illogical and the story didn't make sense.