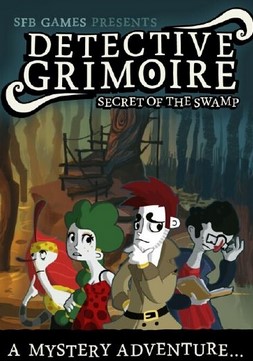 Detective Grimoire is a murder mystery point-and-click game developed by SFB Games and published by Armor Games, which was released on iOS platforms on January 2, 2014. It was later released on Android, PC, Mac, Linux and Steam by SFB Games.

The game has been well received for its mystery, animation, dialogue and protagonist. It is intended to be the first game in a Detective Grimoire franchise.

The game is a sequel to a Flash game of the same name released on Armorgames.com in 2007. That game is a character-driven mystery game more complex than the majority of Flash games in the internet. Players have to search for clues, decipher evidence, interrogate witnesses, and solve the mystery. The playable character was Detective Grimoire. The free game can be found here, and was created by SFB Games (who were known as The Super Flash Bros at that time).

It started off as a Kickstarter project, where it acquired the necessary funds through crowdsourcing.

148apps wrote "Great voice-acting, interesting gameplay, and top-notch animations set Detective Grimoire apart from the masses in a fantastic crime-solving adventure". Gamezebo commented "From the moment you set foot on the docks, Boggy’s Bog is engrossing, its characters alive and endearing, and its mystery simple—yet inescapably intriguing".

Gamer.nl said "Atmospheric images, a filmic soundtrack and very strong acting make Detective Grimoire an experience for everyone. The game offers original and varied puzzles, intuitive controls and a play style that forces to exploring its beautiful world. Enchanting, challenging and interesting to the very end". Adventure Gamers wrote "Detective Grimoire breathes some new life into the investigation/visual novel subgenre with its compelling setting, characters and humour, undermined only by puzzles that are nowhere as enjoyable as the rest of the game", while Hyper Magazine described it as "beautifully presented". Touch Arcade concluded "in this outing, however, Detective Grimoire is going to have to settle for being an enjoyable, though altogether too simple, ride", while AppStar said "though it's a little short and a tad buggy, Detective Grimoire is an entertaining mystery that is elevated by it entertaining art, writing, and voice acting". Pocker Gamer UK wrote "Detective Grimoire goes a long way towards involving you in a funny, wacky cartoon murder mystery. But the case is not quite as complex as you might hope", while Hardcore Gamer Magazine said "For a game like this to have this bad of a mystery at its core should be absolutely unforgivable, but it presents itself with such charm and style that I find myself willing to forgive quite a lot. Not quite that much, but a lot more than I’d expected".