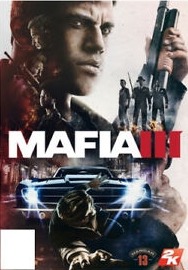 
Mafia III is an action-adventure video game developed by Hangar 13 and published by 2K Games. It was released in October 2016 for PlayStation 4, Xbox One, and Microsoft Windows, and in May 2017 for macOS. It is the third main game in the Mafia series, and the sequel to Mafia II. Set within the fictional city of New Bordeaux, based on New Orleans, the single-player story follows Lincoln Clay, a criminal who aims to build a new crime organization while seeking revenge on the Italian mob.

The development of Mafia III began soon after Mafia II's release, but initially had problems. 2K Czech, the developer of the series' first installments, oversaw restructure, with much of the development team assigned to the company's new studio, Hangar 13. After deciding on recreating New Orleans in 1968, the development team drew influence from the series' previous projects, and designed the game around Clay to replicate the core structure of its predecessors. Much of the development work constituted the open world's creation, and several team members conducted field research around Louisiana to capture footage for the design team. The game's soundtrack features several licensed songs composed by various musicians who were active during the time period.

Upon release, the game received mixed reviews, with praise directed at its story, characters, darker themes, and soundtrack. However, some of the gameplay mechanics and the presence of technical issues drew criticism. The game would go onto have great commercial success, and became one of the best-selling video games in 2K history, with 4.5 million copies shipped in its first week of sales. It was later confirmed to have shipped 5 million copies worldwide.

Mafia III is an action-adventure game set in an open world environment and played from a third-person perspective, in which the player assume control of Lincoln Clay, a Vietnam War veteran on a quest to seek revenge for his adopted family, who are murdered by local mobs. The game is set in 1968 New Bordeaux, a re-imagined version of New Orleans, with the game world being larger than the Mafia and Mafia II maps combined. Mafia III's map is made up of ten districts: Bayou Fantom, Delray Hollow, Barclay Mills, Frisco Fields, Pointe Verdun, Tickfaw Harbor, Southdowns, River Row, Downtown, and the French Ward. Players can complete objectives using a variety of approaches. For example, players can use the weapons provided in the game, like shotguns and revolvers, to eliminate enemies, or call for allies, who arrive in a van and assist players.

Alternatively, they can make use of stealth tactics throughout the entire mission without being noticed by enemies. The core gameplay revolves around gunplay. In addition, players can also perform executing moves and engage in melee-combat. The game features a cover system, allowing players to take cover behind objects to avoid enemy gunfire or detection. Players can interrogate non-playable characters after defeating them in order to gain more information on their objectives, like scaring them while driving a car. Players can attack and overrun locations owned by the Italian mob, and assign one of their lieutenants to operate around the local area. The game allows players to drive cars from the era with realistic driving mechanics and sounds.

Mafia III takes place within the late 1960s, within the fictional American city of New Bordeaux. Situated within America's southern states and coastline, the city is composed of island districts, industrial complexes and ports, high-rise offices and apartments, slums, suburban housing, and historical districts, interconnected by railroads and an extensive road network, with a large swampland separating the city from the coast. The city consists of a mixture of cultures including African-Americans, Irish, Italians and Haitians, and is mostly controlled by one mafia family – the Marcano family – alongside smaller organisations including the Irish Mob, Haitian crime lords, the "Black Mob", and White Supremacists.

The city's design, including its architectural styles, cultures and lifestyles, were influenced by the real-life aspects of the southern United States during the time period, including the real-life city of New Orleans. The game's story focuses primarily within this setting, though DLC content expanded the setting with additional locations around New Bordeaux.

In 1968, African American Lincoln Clay returns to New Bordeaux after serving a military tour of duty during the Vietnam War. Returning to his old neighbourhood where he grew up as an orphan, Lincoln reunites with his old friends, including his surrogate father Sammy Robinson, head of the "Black Mob", his adopted brother Ellis, and local priest Father James. Although intending to head on west to California, Lincoln decides to stay behind and help Sammy after discovering he is having trouble from the Haitian Mob. Despite eliminating its leader, Lincoln learns that the Haitians' interference have left Sammy in debt to mob boss Sal Marcano. To clear the debt, Lincoln agrees to assist Marcano and his son Giorgi in pulling off a heist at the city's Federal Reserve, working alongside Giorgi, Ellis, and Irish mobster Danny Burke. Although the plan succeeds despite complications, Marcano and Giorgi betray the Black Mob, murdering Sammy, Ellis and Danny, and leaving Lincoln for dead.

After James provides assistance to help nurse him back to health, Lincoln decides to exact revenge against the Marcano family. He calls in help from John Donovan, his CIA handler in Vietnam, to assist in his vendetta. Donovan agrees for unknown reasons, and suggests he recruits three noted criminals across New Bordeaux. Lincoln learns that each seeks revenge against Marcano - Haitian crime lord Cassandra, despite resenting Lincoln killing her predecessor, despises Marcano giving her territory to a loyal Dixie gang; Thomas Burke, Danny's father and leader of the Irish Mob, seeks revenge for his son's murder; and Vito Scaletta, an exiled Italian mafioso from Empire Bay who financed the heist, seeks revenge for Marcano double-crossing him and leaving him unable to pay his dues to the Commission. Lincoln helps each regain their former territory in the city, and takes them on as his underbosses so they can support him further.

In time, Lincoln eliminates prominent members of the Marcano family, and foils an attempt on his life, while deciding which underboss get control over a new territory in the city, and its respective rackets. As he continues to control more of the city from the Marcano family, his decisions over the allocation of territory determine the loyalty of each underboss; ultimately he is forced to kill those who abandoned his cause and thus impedes his efforts. Eventually, Lincoln weakens Marcano enough to force him and Giorgi to take their men to a casino they were constructing. Assaulting their last stronghold, Lincoln kills Marcano's men and Giorgi, before confronting the mob boss in his office. Marcano admits defeat knowing that Giorgi's death would be the end of him, and shares a drink with Lincoln. Marcano then dies either by Lincoln killing him, or leaving him to commit suicide out of grief.

As Lincoln prepares to leave, he is stopped by the approach of an elderly Leo Galante and his entourage, sent to investigate the troubles in New Bordeaux for the Commission. When questioned, Lincoln assures Leo he sought revenge only against Marcano, and intends not to fight anyone else. Satisfied, Leo advises Lincoln he can still continue to maintain full control of the city's rackets and establish new businesses, but must do so in exchange for giving the Commission 20% of his earnings in return. Returning to Donovan and James with news of Marcano's death, Lincoln decides on his own fate. If he chooses to rule over the city, James openly despises who he becomes, whereupon Lincoln decides whether to rule alongside his surviving underbosses or alone; the latter leads to James remorsefully killing him with a car bomb. If he chooses to leave, Lincoln disappears from public life, leaving James postcards from time to time, while the strongest of his underbosses takes full control of the city from the others.

In a post-credit scene, Donovan is brought before a Senate committee to answer for his role in Lincoln's crimes. He reveals his motive was to investigate Marcano's link as one of the conspirators responsible for the assassination of John F. Kennedy, and that he attended the Senate hearing because one of the senators presiding over it was implicated as a conspirator in Marcano's files. Donovan then proceeds to kill the senator, openly declaring his intention to track down everybody else responsible for President Kennedy's death.

All games from the serie "Mafia"