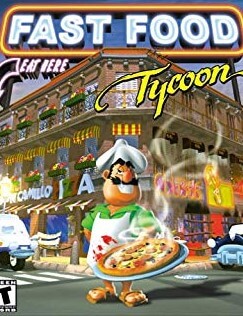 Fast Food Tycoon, also known as Pizza Syndicate in Europe, is an economical simulation computer game developed by Software 2000, and licensed to Activision Value Publishing. Similar to Pizza Tycoon, Fast Food Tycoon is centered on the object of creating and managing a successful pizza restaurant-chain business. The series spawned a sequel, Fast Food Tycoon 2. It also received an expansion pack, Mehr Biss, which was released only in German.

Fast Food Tycoon tests the player's culinary expertise and management skills. One creates his/her own character through balancing personal traits and experience, at the expense of age and starting money. The game provides more than 800,000 different character possibilities. The gameplay can be both open-ended or object-oriented. The player determines the conditions and objectives of the game during player configuration.

The player must manage and decide branch-location, pizza recipes, interior design, global marketing and fast food advertising strategies, employees, and out-competing rivals. The player has control of every aspect of the game, from the type of seating used in the branches to the medium of advertisement. The player can even choose what bank to invest/borrow from.

Fast Food Tycoon also offers the "syndicate" theme where managers utilize the "underground" (Mafia) to meet his/her goals. The player can both form his own syndicate, or join an already established organization to partake in the darker side of the business. However, if the player is killed during a syndicate mission, the simulation ends. The player must weigh the benefits of illegal activity against the dangers of mafia life.

Fast Food Tycoon allows for up to 6 computer opponents, simultaneously competing in up to six different international cities, picked from a list of 20. The game also includes up to 140 interactive characters in each city, and multi-cultural soundtracks matching each city’s location. Fast Food Tycoon incorporates a playful sense of humor into the animated game play, with a multitude of menus and tools.