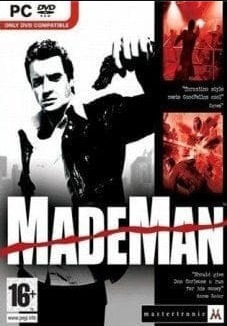 
Made Man is a 2006 third-person shooter video game developed by the UK company SilverBack Studios and published by Mastertronic and Aspyr for PlayStation 2 and Microsoft Windows. The game is set in the New York City underworld of organized crime in the Mafia. The storyline is written by crime author David Fisher with collaboration from former mafioso Salvatore "Bill" Bonanno.

The player assumes the role of Joey Verola, a former soldier, as he is indoctrinated into the world of American organized crime and must relive his life - every moment, every kill - as he rises through the ranks to become a made man. The storyline spans three decades of his life, from the horror of Vietnam to the urban jungle of Brooklyn.

Joey is forced into the world of crime when he saves a don's right-hand man in Vietnam. The game's missions are a series of flashbacks: as Joey is being driven to the don's place to be made he reveals to his nephew how he rose through the ranks.

The title was originally under development at Acclaim Entertainment's Manchester studio under the name of Interview with a Made Man. When Acclaim collapsed, employees from its studio reformed as SilverBack Studios, and backed by Fund4Games, continued to work on the game. The title was shortened to Made Man and a planned Xbox conversion was dropped.

The game has generally received negative reviews, with IGN giving the lowest score. They've given it a 2.4 out of 10 for "Poor graphics, banal sound effects, and frequently absurd voice acting".

(0) Comments on "Made Man Full Version"