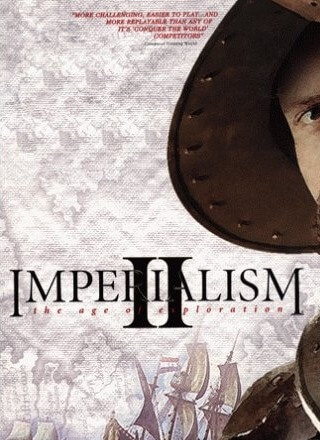 Imperialism II: Age of Exploration is a turn-based strategy computer game developed by Frog City Software and published by Strategic Simulations, Inc. (SSI) in 1999. It is the successor to the 1997 game Imperialism. In Imperialism II, the player starts as ruler of a 16th-century European country, and must build an empire.

Since 2001 Ubisoft owns the rights to the Imperialism trademark.

Imperialism II is a turn based 4X game, where you have to "eXplore, eXpand, eXploit, and eXterminate" in order to achieve victory. The game however focus on the economic aspect by introducing the concepts of variable worker productivity, variable terrain productivity, labor allocation, resource allocation and logistics.

Every worker, ship and military unit requires one unit of food (wheat, meat or fish) every turn. Because of this necessity, enlarging the labor force depends on the increase of the food supply. Increasing the food supply demands semi-finished materials in order to improve farms or expand the merchant marine which can transport fish.

Labor has 4 different levels of productivity. Each higher level of productivity requires a unique type of luxury. This element of the game allows the player to increase total production without enlarging the labor force which would require raising the food supply.

Avoiding bankruptcy and keeping the Empire solvent is also a challenge. That's because the Empire's treasury finances scientific research, military invasions and the importing of goods. It also pays for the creation of civilian units and for the upgrade of the work force. On the Diplomatic arena the treasury finances grants to foreign nations and trade subsidies.

The treasury has as sources of income the mining of precious material, the exporting of goods and overseas profits. Overseas profits is income generated by the export of raw-material collected from foreign lands bought by the Empire.

The game is won when any of the "great powers" (France, Holland, Spain, England, Portugal or Sweden) controls more than one-half of the Old World. Control over other countries can be achieved by conquest or by diplomatic means (influencing "minor nations" Denmark, Germany, Ireland, Italy, Scotland, Switzerland and even the "great powers", so they would finally join the player's empire), or most often a combination of the two. Control of the New World is not relevant for the victory condition.

Differences from Imperialism I

The main novelty in Imperialism II compared to its predecessor, is the addition of the New World, which is unknown and has to be explored. Unlike in Imperialism I, only part of the world is visible at the start and this part is the Old World. The other half of the world is the New World, which must be explored by ships and explorers. The New World has resources that don't exist in the Old World; those resources are the precious materials (spices, silver, gold, gems and diamonds) and the luxuries (sugar cane, tobacco and fur).

According to former members of Frog City Software at Sidecar Studios, Imperialism II "exceeded sales goals by 50%" and "matched the sales of its predecessor", whose sales had surpassed 300,000 copies.