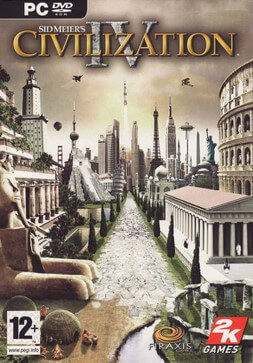 Civilization IV uses the 4X empire-building model for turn-based strategy gameplay, in which the player's main objective is to construct a civilization from limited initial resources. Most standard full-length games start the player with a settler unit and/or a city unit in the year 4000 BC. As with other games in the series, there are by default five objectives the player can pursue in order to finish the game: conquering all other civilizations, controlling a supermajority of the game world's land and population, building and sending the first sleeper ship to the Alpha Centauri star system, increasing the "Culture ratings" of at least three different cities to "legendary" levels, or winning a "World Leader" popularity contest by the United Nations. If the time limit for the game is reached and none of the previous goals has been fulfilled by any players including game AI players, the civilization with the highest total game score is declared winner. A large departure from earlier Civilization games is a new graphics engine created from scratch, based on the Gamebryo engine by Numerical Design Limited (NDL).

The game has received critical acclaim and was hailed as an exemplary product of one of the leading video game producers in the turn-based strategy genre. Civilization IV sold over 3 million copies by 2008 and won multiple awards, including several Game of the Year awards. Its title song, "Baba Yetu", was the first piece of video game music to win a Grammy Award. Two major expansions were released, Civilization IV: Warlords and Civilization IV: Beyond the Sword, as well as the standalone game Civilization IV: Colonization, which were all combined in 2009 into one release edition titled Sid Meier's Civilization IV: The Complete Edition.

Civilization IV follows some of the 4X model of turn-based strategy games, a genre in which players control an empire and "explore, expand, exploit, and exterminate", by having the player attempt to lead a modest group of peoples from a base with initially scarce resources into a successful empire or civilization. The condition for winning the game is accomplished through one of the five ways: militarily defeating all other civilizations in the game world, controlling over two-thirds of the game world's land and population, building the first spaceship in the Space Age and sending it to Alpha Centauri, having the most dominant Culture ratings over other civilizations, or becoming "World Leader" through the United Nations votes. Additionally, there are multiple game scores for each civilization throughout the game based on the actions of each civilization and a number of different factors, allowing for a win condition based on the total of these points if the game timer runs out. The game can be played in multiple modes: as a single player facing against one or more computer-controlled opponents, in hot seat mode, or through online multiplayer games.

As with other turn-based strategy video games, the player can customize the look and feel of their game world as well as the difficulty of any game AI players before the game starts. Each map space has a terrain type, such as plains, tundra, or desert, that affects the available resources players can extract from their environments and the movements of certain units through that terrain. The player is then given a total of 18 different civilizations to choose from, each with their own pros and cons, plus a leader avatar, an initial set of civilization technology, and any units unique to that civilization. When the game starts, however, it chooses random locations to place across a predefined square grid map. Like other strategy games, Civilization IV has a fog of war feature, in which unexplored territory remains darkened and territories without any units stationed on its designated square is shaded with darker colors.

Most units that the player can generate and use are military units, with certain attributes such as combat strength and movement rate particular to each military type. Each unit can gain experience through combat, which later translates into experience points that the player can use to assign military units new bonuses. Initially, most combat takes place on land, but further advancements in the game's technology tree can allow the player ships and planes with which to fight battles on sea and in the air. Any number of units can be stacked onto a single space and move as a group if so assigned, but the overall combat phase is resolved by one-on-one unit battles.

Combat is initiated when moving military units are moved onto the square occupied by an opposing force's military units and cities, and combat is then resolved with calculating statistics of each unit combined with some random chance. Defeated units are removed from the game (apart from workers and settlers, which are captured by the attacking force), and any attacking units that are able to defeat the last defending military unit on a space will move to occupy that space. If the space is occupied by a city the player may choose to occupy and capture the city as their own or raze it. Other than combat, military units can also be assigned to fortify a specific space, perform sentry duties, destroy enemy city improvements, or explore the game world.