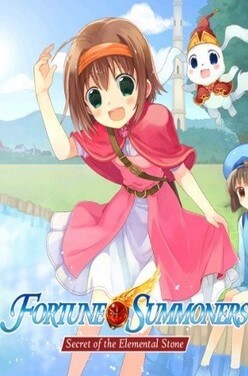 Gameplay in Fortune Summoners consists of side-scrolling action, with you in control of one of three party members and the computer controlling the other two (with highly customizable AI dictating their actions). You will explore towns, delve dungeons, climb towers and, just maybe, find Arche a snack or two. Combat is different depending on who you control - Arche, being a swords-girl, controls in a fashion similar to a character from a brawler or fighting game, with many special moves tied to button combos. Sana and Stella, her companions, rely more on their varied selection of spells to see them through a fight - spells that rain ice down on enemies, make mirror images of friends, or set the ground ablaze!"

Arche Plumfield, a young girl moves to the town of Tonkiness with her parents and enrolls in the local magic school. However, she soon finds out that in order to perform magic she needs the power of an elemental stone.

In the West, Fortune Summoners received mixed reviews from critics. Sam Marchello of RPGamer scored it 1.5 out of 5, calling the game "a repetitive nightmare" with "poorly designed dungeons and neverending cutscenes filled with trite dialogue." Francisco Acosta, writing for MeriStation, said that "For lovers of titles like Ghosts'n Goblins, Zelda II or Wonder Boy, Fortune Summoners is nothing short of essential, but we must bear in mind its limitations."