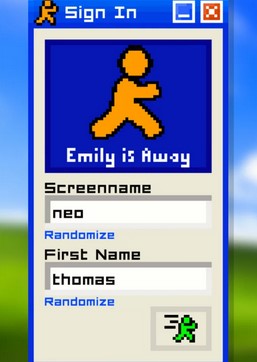 Emily Is Away is an indie visual novel by game developer Kyle Seeley, released for free in November 2015. The game's story is linear, with the player unable to significantly change the course of the plot throughout the game. Set in the early-to-mid 2000s, Emily Is Away tells the story of the protagonist's relationship with a girl, Emily, over the course of five years, from the senior year of high school to the senior year of college. The game is presented through a chat client on Windows XP styled after ICQ and AOL Instant Messenger, specifically their builds in the early-to-mid 2000s, complete with other users' profiles and interface. The choices for profile pictures are generally collected from the culture of the early-to-mid 2000s, including 28 Days Later, The Ring, Harry Potter, Lord of the Rings, blink-182, Red Hot Chili Peppers, Eminem, and Avril Lavigne on the first level.

Throughout the course of the game the player is given the option of changing avatars in tandem with whatever was popular at the time. Their friends also show progression by choosing new icons, biographies, and away messages.

In the protagonists' senior year of high school in 2002, they use a chat client to talk with "emilyluv", "emerly", or Emily. They discuss high school and a fellow student, Brad, who keeps sending Emily messages. They also talk about a party that a classmate Travis is throwing that evening, which they may or may not go to, depending on player choices. Then they say goodbye as Emily logs off.

In their first year of college (2003), the player talks to Emily again, who has gotten together with Brad or Travis (depending on if the player chose to go to the party or not), though she hints that the relationship has become rocky. The character congratulates her, and shifts to other questions, such as their classes. They say goodbye, as Emily yet again logs off.

In their second year of college (2004), the player learns that Emily has broken up with Brad/Travis, explained by Emily as "growing apart", and the character is given the option of consoling her. At this point, Emily either asks why they didn't come to Travis's party in 2002 or why they didn't kiss her if they did attend, depending on the player choices. They both wonder what could have been, and Emily immediately asks if she can come to visit. Most of the time, they will agree for Emily to come, and the player will subsequently cancel their plans with Emma, a friend of the player. The player, alternatively can choose to not allow Emily to come. Emily signs off.

In their third year of college (2005), the player again talks to Emily, who wants to talk things over about her previous visit. If the character doesn't set boundaries and Emily visits, it turns out that Emily and the character ended up hooking up, and Emily feels like she was taken advantage of when she was vulnerable. If the character does set boundaries and they don't hook up, Emily asks if the character had feelings for her when she visited and why they didn't make a move. Alternatively, if you choose to not let Emily visit, she will ask you about your new friends. The conversation is awkward and distant, with Emily eventually leaving due to her discomfort, feeling too weird to continue.

In their final year of college (2006), Emily and the character have clearly grown apart. Emily comments how her life is better now; she started dating Brad/Travis again and is involved in other things. The player themselves have lost their friend Emma, in some cases because of Emily. As the conversation comes to an uncomfortable and cold finish, the character begins to revise sentences asking if the two will ever be the same - deleting earnest questions and asking about the weather or other mundane affairs instead. Despite the protagonist's obvious feelings for Emily, she obviously no longer cares, and as a result, they say goodbye. For the first time, the player character is the one who leaves the conversation, logging off.

Alternatively, if the player chooses not to talk things over in 2005, Emily will refuse to talk at all in 2006, stating she is too busy.

Emily Is Away was met with mostly positive reviews, receiving an average score of "Very Positive" on its Steam page.  Reviewers noted it for its gameplay, characters and price, but noted that it was short. Wired praised its gameplay and characters, calling it "one of those rare games that completely stopped me in my tracks."  Rock, Paper, Shotgun said it was "good fun, for the nostalgia factor if nothing else."

Emily Is Away System Requirements

(0) Comments on "Emily Is Away Full Version"