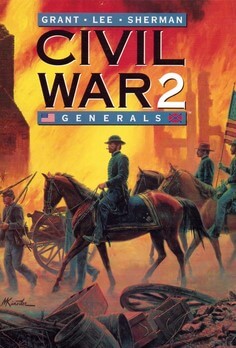 Grant, Lee, Sherman: Civil War Generals 2 simulates on a tactical level individual battles of the American Civil War and allows one to play as either the North or South in a number of different campaigns. It links the battles together by making the losses in one battle reflect on the forces available in the next. Also, the capture of supplies during one battle allows one to purchase weapons upgrades before the next.

Improvements from Robert E. Lee: Civil War General included the addition of several new units, including mortars, siege artillery, and naval vessels, new terrain types, more detailed graphics, and larger maps. Certain artillery types gained the ability of indirect fire. Army structures were expanded to include divisions and regiments; scenarios may be played at the brigade or regimental level. If the latter is selected, regiments are controlled as individual units on the map, with brigade commanders taking the place of division commanders and division commanders taking the place of corps commanders. The Easter Egg multiplayer campaign mode from the first game was deleted. Unit leaders may be influenced by their commanding officer and their ratings increased or decreased depending on the superior officer's ratings. A corps or division commander will influence all subordinate units within a three square radius (six squares if playing at regimental level).

The basic elements of gameplay in Civil War Generals 2 are the same as Robert E. Lee and are covered in the article for the latter game.

Corps commanders in Civil War Generals 2 were made into separate units on the map with division commanders taking the place of corps commanders in Robert E. Lee, meaning that they can be reassigned to any unit under their command and are treated by the game as the commander of whatever unit they're assigned to instead of its regular commander. A routed unit will run towards its respective corps headquarters first and then to the edge of the map. The ability to completely annihilate an enemy unit was removed from Civil War Generals 2, as well as the ability to cause a unit to desert if morale becomes too low. The exception to the latter are siege artillery and mortar units, as these are too ponderous to flee the field and will be captured whole or desert if morale drops below a certain point.

New units in Civil War Generals 2 include siege weapons and naval units. Naval units may only enter water/coastal hexes and only the Union side has access to frigates; otherwise, they are functionally the same as artillery. Siege weapons include heavy artillery and mortars; the former carries more powerful, longer-range guns than field artillery, while the latter are functionally the same as howitzer artillery. The effectiveness of mortars decreases the closer to the target they are. Heavy artillery are fixed units that cannot move or retreat. Mortars can be limbered and moved around the map, but very slowly due to their size and they also cannot retreat from an enemy attack.

The game also split horse artillery into a separate unit that is similar to a howitzer, but it can be moved around the map faster than normal artillery and can also change formation and attack in the same turn.

Howitzer-type artillery units may fire at hexes they do not have a direct line of sight on, these are indicated on the map with a grid pattern. Hexes highlighted as such may be fired into even if there's no visible target. This feature may be used if the player has reason to suspect that an unseen enemy unit is in a particular hex. When performing indirect fire, the artillery has a chance of missing the hex it's firing at; it may even hit one of your own units and produce "friendly fire" casualties.

The game also introduced scout units and engineers; these unit types cannot initiate attacks but will defend themselves if attacked. Engineers can perform several different construction/demolition actions, building a pontoon bridge uses up the engineer unit and it will not be accessible for the rest of the game.

A unit's morale is calculated by the game based on the stats of the unit plus its leader's stats, as well as other factors including terrain and success or defeat in combat.

Like in Robert E. Lee, a leader who is killed or wounded in battle will be replaced by the next highest ranking leader under him. The game decides this primarily based on rank, thus if a brigade commander is killed and the regimental leaders under his command consist of three captains and a colonel, the game will pick the colonel to replace him. If a unit structure contains multiple leaders of the same rank, the game picks the leader from the unit with the lowest ID number. Each unit may also have a pool of up to four replacement leaders, which if present will be drawn upon instead of leaders from the commands underneath. Regimental leaders, if none are available in their replacement pool, are replaced by an unattached leader of the same rank or below. The game engine will create generic leaders if no unattached ones exist, however they will have very low ratings.