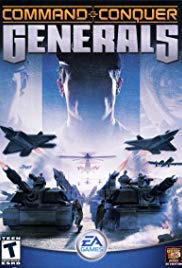 Command & Conquer: Generals is a real-time strategy video game and the seventh installment in the Command & Conquer series. It was released for Microsoft Windows and Mac OS operating systems in 2003 and 2004. While the Windows version of Generals was developed by EA Pacific and published by EA Games, the Mac OS X version was developed and published by Aspyr Media. The Mac OS X version was re-released by Aspyr for the Mac App Store on March 12, 2015. In the game, the player can choose from three different factions: the United States, China and the Global Liberation Army (GLA).

Generals takes place in the near future, with players given a choice of three factions to play. In Generals, the United States and the People's Republic of China are the world's two superpowers, and are the targets of the Global Liberation Army (GLA), an omnipresent borderless terrorist organization, fighting as a fanatical irregular force. The United States and China are depicted as allies in the series who occasionally co-operate against the GLA, whose goal is to eliminate the military forces of China and the United States.

The Chinese campaign starts with GLA forces launching attacks on Chinese cities, starting with the detonation of a stolen Chinese nuclear warhead in Beijing during a military parade, which kills thousands. In a separate attack, the GLA destroys a bridge leading into Hong Kong to decimate a Chinese armored division. Undeterred, the Chinese manage to hold off the offensive, despite having to destroy the Three Gorges Dam in the process in order to stall the GLA's advance and regain the initiative. Now on the counter-offensive, the United States provides air support to the Chinese as they launch a counterattack into GLA-occupied Balykchy, almost completely destroying the city. The Chinese then learn that the terror cell responsible for the attacks across China has been located in Dushanbe, and a massive Chinese attack is ordered, using nuclear weapons to finally put an end to the GLA incursion.

Despite losses against the Chinese, the GLA's influence in the Middle East as well as its strong presence in Kazakhstan is relatively unaffected. To continue the war against America and China, the GLA acquires cash by raiding United Nations convoys as well as causing mass riots in Astana. Resurrected in the Middle East, the GLA now once again poses a significant threat. The United States fully mobilizes against the terrorists by raiding the GLA's toxin deposits in the Aral Sea as well as deploying the might of the US Air Force against the GLA's troops. The GLA responds by attacking the Baikonur Cosmodrome, where it intends to use the Cosmodrome to fire long-range toxin missiles at highly populated cities in Europe and abroad. (An attack of this magnitude is introduced during the first US mission in the expansion pack Zero Hour. The missile is fired at an American naval base somewhere in Northern Europe, prompting the U.S. to respond.)

The United States military deploys to Iraq, Yemen, and eventually Kazakhstan to liberate the countries from GLA control. The GLA reacts by firing Scud missiles against American forces, and ambushes an entire U.S. division in the Hindu Kush in Afghanistan. Despite its losses, the U.S. continues the offensive, and even moves to neutralize a rogue Chinese General who has given the GLA nuclear weapons. The U.S. is able to defeat the renegade and prevent the nuclear weapons from being used. The American resolution to destroy the GLA culminates with Operation Last Call, a joint American-Chinese assault on the GLA capital of Akmola, Kazakhstan. Pulling no punches, the capital is liberated from GLA control, and the world celebrates the end of GLA tyranny.

Command and Conquer Generals operates like most other real-time strategy games, in that the player must construct a base, acquire resources, build various combat and support units, and defeat opponents. Various unit types can be constructed, ranging from infantry to vehicles and air units. The player may control the United States of America, the People's Republic of China, or the Global Liberation Army, and each side has its unique characteristics and abilities. All sides share some similarities, such as training infantry at a barracks, building armored vehicles at a factory, possessing "high tech" buildings needed for more advanced units, possessing a means to acquire additional resources and possessing a unique superweapon.

The United States relies on an arsenal of high-tech weaponry and a dominant air force; however, it is the most expensive army in the game to maintain. China relies on the power of propaganda and hordes of troops and tanks to overwhelm their opponents, the drawback here being that its troops must be able to form the larger army in the match. The GLA is considerably weaker in a head-on engagement, and must rely on underhanded, sneaky, shoot-and-scoot tactics to defeat its opponents.

The game's interface is similar to that of real-time strategy games such as Age of Empires or StarCraft. The player selects buildings to bring up build orders and purchase upgrades, and can select individual units to activate their special abilities. Structures are built by selecting dedicated builder units (U.S.A and China: Construction Dozer. GLA: Worker.) and placing the structure anywhere on the map.

As with other real-time strategy games, the various units have advantages and disadvantages against other units, and the player is encouraged to mix unit types in order to succeed and fight tactically with various unit abilities in order to win. For example, rifle infantry are capable of quickly killing other infantry types, but are vulnerable to light vehicles and dedicated anti-infantry/anti-air units such as tankettes and APCs, which in turn are vulnerable to main battle tanks, which themselves are vulnerable to missile-equipped infantry and aircraft.