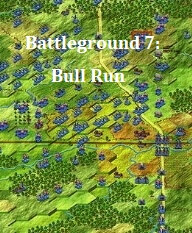 Battleground 7: Bull Run is a turn-based computer wargame developed by TalonSoft in 1997, the seventh issue in the popular Battleground series. It simulated combat at the 1861 First Battle of Bull Run and the 1862 Second Battle of Bull Run, using both a video version of miniature wargaming and board gaming. Terrain hex maps are 3D or 2D with various scales and sizes.

The basic platform for the Battleground series involves individual infantry and cavalry regiments, artillery batteries, and commanders. All are rated for strength, firepower, weaponry, morale, and movement. As a unit takes fire, it may become fatigued, disordered, or routed to the rear. Players compete against the computer's artificial intelligence or against another player via modem. Players may try a variety of individual scenarios, or refight the entire battle of First or Second Bull Run (known as Manassas in the South). A Fog of War option enhances playing against the computer, as it hides units that are not in direct view of the enemy.

All games from the serie "Battleground"