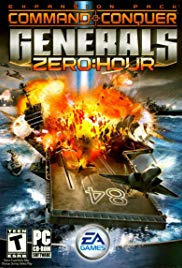 Command and Conquer: Generals – Zero Hour is the expansion pack for the 2003 video game Command & Conquer: Generals. Zero Hour added several new abilities and units to each side, and a new mode of play called Generals' Challenge, along with a lot more changes, new features and bug/glitch fixes.

Zero Hour also contains 3 new campaigns of five missions each, one for each side, with their chronological order being USA first, GLA second, and China last. Unlike the previous campaigns, which were noted by Command and Conquer fans for not having full motion video cinematic sequences during mission briefing, the Zero Hour campaigns return to that Command and Conquer tradition, each showing a live-action video of a news reporter of the respective side giving details about the situation and instructions for what to do behind the current mission. The plot behind the Zero Hour campaigns picks up where it left off at the end of the previous campaigns.

The beginning of the US campaign relates to the GLA's success in the previous game. The GLA uses the Baikonur Cosmodrome to fire a toxin warhead at a US naval base in Northern Europe, prompting the US to respond before another missile can be fired. A Chinese assault on the base had previously failed, so the US uses the powerful Chinese arsenal to overrun and destroy the missile silo using a B-2 Bomber. The US then tasks itself with watching over the relief effort by the United Nations in Mogadishu, however GLA incursions make the relief mission difficult. A US carrier group in the region provides aerial cover as US forces storm a secret GLA base, unintentionally discovering documents relating to 'Dr. Thrax', a GLA General who through almost unlimited funds in Iran plans to develop Anthrax Gamma Toxins. The USA responds by invading the oil fields funding the program, but it is soon learnt that Dr. Thrax has already developed the agent and plans to fire missiles loaded with the toxin at major US cities. A US led assault on Dr. Thrax's complex, supported by disillusioned GLA separatists, allows the US to capture the missile sites before they can be launched. It is also implied that Dr. Thrax was killed in the assault.

The start of the GLA campaign begins with Dr. Thrax's second in command (it is implied that the player acts as this person) being pursued by the Americans through an unknown city in the Middle East. Despite intense Tomahawk bombardment by the Americans, the General manages to evade the American pursuers and escapes from the area in a plane. With the whereabouts of Dr. Thrax still unknown, the GLA command is in complete disarray resulting in several splinter cells being formed to seize power. One such General, Prince Kassad uses stealth technology to which is vital to the GLA's war effort. Reluctant to share, the GLA loyalists attack Kassad's base in Egypt, acquiring the stealth technology and killing Kassad in the process. Now equipped with new technology, the GLA launches a series of covert operations in the Mediterranean, aimed at destroying the US fleet based there, including the USS Ronald Reagan, a powerful super carrier. The GLA remarkably achieves this feat by using a captured Particle Cannon to sink the carrier. Shaken by the decisive victory, rumors begin to spread that the US is unwilling to continue its war against the GLA and will begin pulling troops from its bases in Europe. The GLA seize this chance and land commandos on the US West Coast to steal toxins and US Army equipment from inside America. Jarmen Kell leads the attack, and ultimately succeeds in forcing the bulk of US forces based in Europe to defend the homeland. The GLA once again seizes at the chance of a weaker American presence in Europe, and launches an assault on US Central Command Base in Stuttgart using captured Chinese and American weaponry. The assault succeeds, and ushers in the period of GLA control over Europe.

Embarrassed by the GLA's use of Chinese weaponry, the Chinese respond by deploying nuclear weapons against the terrorists in Europe. Survivors of the nuclear attack at Stuttgart prompt the Chinese to remove the GLA threat and liberate Europe in the process. But as the Chinese mobilize in Europe, a massive GLA assault against a nuclear reactor complex near Yencheng almost results in another GLA incursion inside China's borders. The attack is thwarted, the Chinese having successfully secured their borders once more. Determined to eradicate the GLA in Europe, the Chinese begin the counter-offensive in Germany, but international opinion of the Chinese will determine how well they will be received, so restraint is placed upon the Chinese to not deploy their nuclear weapons here. The city of Coburg is heavily defended by the GLA, but the Chinese resolve manages to push back the defenders, ultimately wiping out the GLA in the region, as well as allowing European opinion towards the Chinese to skyrocket. After taking serious losses to the Chinese, the GLA begins a mass withdrawal from Europe, but part of the route will pass a PLA base in Halberstadt, which is outfitted to intercept the retreating forces. Having lost almost all of its forces present in Europe, the GLA has but one last stronghold based in Hamburg. The Americans manage to rally enough forces to attack the base, but the GLA ambushes the American base, capturing several pieces of US hardware that will be put to use to halt the Chinese juggernaut. The Chinese manage to acquire US technology themselves, and push towards the heavily fortified GLA base. After heavy fighting, resulting in massive casualties on both sides, the Chinese emerge victorious and takes its place as the world's sole superpower. Meanwhile, it is implied that after the war, America adopts a policy of isolationism.