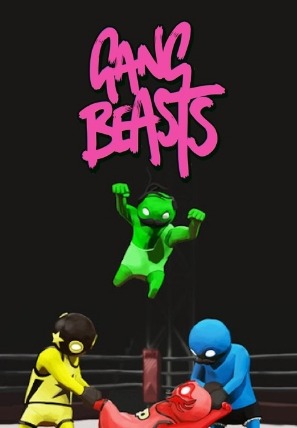 
Gang Beasts is a multiplayer beat 'em up party game developed by British indie studio Boneloaf and published by Double Fine Presents. The game released for Microsoft Windows, macOS, Linux, and PlayStation 4 on December 12, 2017, following an early access period for the PC platforms that began in August 2014. It was also released on the Xbox One on March 27th, 2019.

Gang Beasts is a cross-platform multiplayer beat 'em up party game with gelatinous characters, melee fight sequences, and hazardous environments, set in the fictional metropolis of Beef City. At initial release it contained 8 multiplayer stages. The core gameplay involves using various physical abilities such as punching or kicking an opponent until they are knocked out, and then attempting to toss them over one of the stage hazards. Opponents that have been knocked down are not completely defenseless however, as they can fight back to be released.

Already in its freeware alpha state, as well as upon Steam Early Access release, the game was met with positive response from critics and fans.