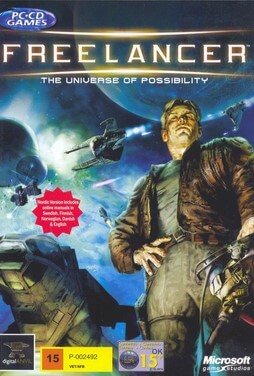 Freelancer is a space trading and combat simulation video game developed by Digital Anvil and published by Microsoft Game Studios. It is a chronological sequel to Digital Anvil's Starlancer, a combat flight simulator released in 2000. The game was initially announced by Chris Roberts in 1999, and following many production schedule mishaps and a buyout of Digital Anvil by Microsoft, it was eventually released in March 2003.

In the game, players take on the roles of spacecraft pilots. These characters fly single-seater ships, exploring the planets and space stations of 48 known star systems. They also engage in dogfights with other pilots (player- and computer-controlled) to protect traders or engage in piracy themselves. Other player activities include bounty-hunting and commodity trading. The single-player mode puts the player in the role of Edison Trent, who goes through a series of missions to save the Sirius sector from a mysterious alien force. In multiplayer mode, players are free to take on any role and to explore anywhere from the start.

Players take up the roles of pilots who fly single-seat spacecraft, trading with merchants on space stations and planets, and engaging in combat against other vessels. Starting with a small spacecraft in a star system, the player's character explores the region, opening up new systems for further adventures. Each system provides opportunities to increase the pilot's wealth; aside from taking on jobs to ferry goods and hunting for bounties, the player character can engage in trade. The player character's primary goal in the game is to accumulate money, so as to buy more advanced weaponry and equipment to upgrade his ship.

The game is played primarily through "pointing and clicking" with the mouse and a few keyboard commands. This system is also used to control the spacecraft, a breakaway from the traditional use of joysticks for space flight simulators. Observing their spacecraft from the rear, players fly their ships by moving the mouse in the direction they want the vessels to go. Freelancer's spacecraft follow simplistic flight dynamics; however, a dash of realism is implemented by allowing the vessels to cut power to their engines and turn to face any direction while drifting along their original path—conservation of momentum. Clicking the mouse button shoots the ship's weapons at the location of the cursor. The interface has no radar display; the location of objects not shown on the screen are indicated by pointers at the screen's edges. Targeting, communications, and navigation data are displayed in information boxes that can be minimized.

After the pilot docks with a space station or lands on a planet, the screen and its interface change to a rendition of the area he is visiting. The player moves the pilot to different locations and interacts with certain objects, such as reading a bulletin board and talking to other characters, by clicking on their graphical representations. Freelancer's economy consists of buying and selling spacecraft, their armaments and components, and commodities. Certain goods are considered contraband in some systems, and they have to be smuggled past police patrols to their buyers. Computer-controlled characters (non-player characters or NPCs) in certain locations on the planets or stations offer quests and jobs.

Freelancer features a multiplayer mode, allowing up to 128 players to play together in a game. Multiplayer games are hosted on game servers; personal computers that meet the requirements for the game can act as a server. Gameplay is similar to the single-player mode, but is absent of story-driven quests. The server keeps individual records of the players' progress, and they can resume their game on their next log on to this server. A persistent virtual galaxy is thus maintained for them.

The events in Freelancer take place 800 years after those in the video game Starlancer (2000). The solar system was engulfed in a civil war, fought between the Western Alliance and the Eastern Coalition. Facing defeat, the Alliance placed its people in stasis and sent them to the Sirius system, where they settled and transformed the surrounding space (the Sirius sector) into a region of political intrigue and opportunity. The rule of the sector is mostly split among four houses, each named after the sleeper ship that brought them to the system. Each house exhibits the culture of its terrestrial ancestor: Liberty of 1920s United States, Bretonia of Victorian era United Kingdom, Kusari of Shogunate era Japan, and Rheinland of Second Industrial Revolution Germany. The fifth sleeper ship, Hispania, suffered a malfunction en route and was abandoned in deep space (in the Omicron Alpha system). The descendants of its crew became pirates.

Freelancer's planetary bodies and space stations lie close to a single plane in each system, although some are above or below this plane and ships can travel out of the plane. There are 48 known star systems, and spacecraft can travel from one system to another by passing through jump gates. Within a system, spacecraft can travel in the trade lanes—a series of gates that connect to form a "space highway"—to quickly reach places of interest, such as planets, space stations, and mining operations. Asteroid and debris fields populate some of the systems, and secret hideouts and derelicts with valuable items exist in deep space. Merchant ships ply the trade lanes, carrying cargo from system to system and occasionally coming under attack by pirates. Patrolling the systems are police and large naval warships.