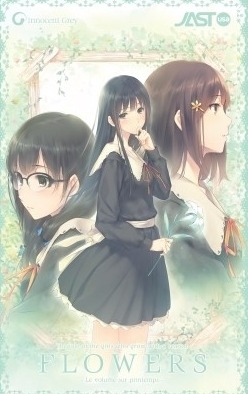 Flowers is a series of yuri-themed visual novel video games developed by Innocent Grey. The first entry, Flowers: Le Volume sur Printemps, was released in 2014; three more games were released in 2015, 2016, and 2017.

The Flowers series is developed by Innocent Grey, with art by Miki Sugina. Unlike their previous games, the developers decided to not focus on characters' deaths, instead depicting female students' everyday life, and how they cooperate to solve mysteries. Even prior to the first game's release, it was decided that there would be four games, representing the four seasons.

During their panel at Anime Expo in July 2015, JAST USA announced that they would localize and publish the first game in late 2015; the localized demo was eventually released in February 2016, with the full game planned for both physical and digital release in March 2016. Due to translation errors, JAST USA had to delay the game to allow time for heavy editing and quality assurance; the game was eventually released in English in August 2016.

All games from the serie "Flowers"