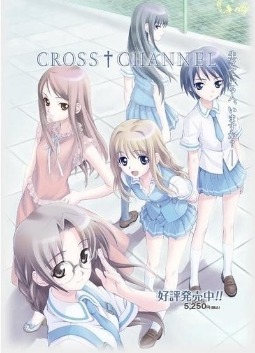 Gunjo Gakuen ("Deep Blue School") is a facility designed to gather and isolate those students with a high adaptation coefficient (indicating that the student is less likely to be able to adapt to society), determined from an adaptation exam mandated by the government.

After a failed summer vacation with other members of the school's broadcasting club, Taichi Kurosu and some of the other club members return to the city, only to find that all living creatures within it except for the club members have completely vanished. In order to confirm the status of the outside world, Taichi decides to gather other club members to help Misato Miyasumi, the president of the broadcasting club, set up a broadcasting antenna to contact any possible survivors. However, Taichi soon discovers that the world is actually repeating the same week and thus all their actions are reset, with no loss or gain, no matter what actions are taken. Seeking himself and the restoration of broken bonds, Taichi must discover meaning to exist in this strange and lonely but, for Taichi, comforting world.

Taichi Kurosu: the protagonist. He calls himself "The Love Aristocrat". He was trying to act as a human, while hiding his score of 84% on the exam, which is almost beyond human boundaries.

Miki Yamanobe: a cheerful girl. Taichi jokes about her being his pupil in perversion. Is sometimes cruel but is funloving. Her adaption coefficient is 40%, which Taichi remarks as being "right on the cut-off line."

Kiri Sakura: a squeamish, untrusting girl who hates and fears Taichi. She is a good friend of Miki, albeit a rather clingy friend. Kiri and Miki are nicknamed "the flowers" by Taichi, because they seem to be "two flowers from the same pot."

Misato Miyasumi: a girl with glasses. She is the president of the broadcasting club. Her exam score is never revealed, but Taichi does note her engaging in severe self-destructive behavior from time to time, which would put her at least above 30. She refers to Taichi as "Peke-kun". She has a problem with Tomoki, the brother she has been separated from since the divorce of their parents.

Touko Kirihara: a girl descended from a samurai clan. She used to go out with Taichi, but currently is very harsh to him. "Kirihara" is an anagram of Harakiri, which Taichi sometimes uses as her nickname. She scored 46% on the exam, and as Taichi says at one point, is "desperately trying to hold on to the last 54% of her humanity as best she can."

Youko Hasekura: a kunoichi (female ninja). She's always monitoring Taichi. She is very devoted to Taichi, sometimes to the point of stalking him, but he for the most part ignores her. She used to be Taichi's first love, and is admired by Taichi for being an almost complete person in his mind.

Nanaka: a mysterious girl who wears a school uniform different from that of Gunjo Gakuen. She always suddenly appears or disappears in front of Taichi without warning, usually by violently crashing into him on her bike.

Famitsu gave the PlayStation 3 version of the game a review score of 30/40, whilst the PS Vita version was given a score of 28/40.