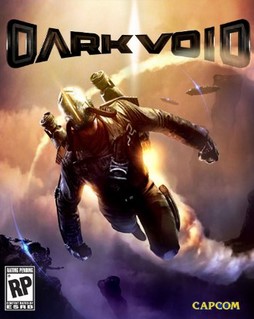 Dark Void is a video game developed by Airtight Games using the Unreal Engine 3 and published by Capcom for the PlayStation 3, Xbox 360 and Microsoft Windows. In the game, players must face an alien threat that humanity had previously banished. The game mixes on-foot and mid-air combat. It was released worldwide in January 2010.

A Games for Windows – Live version of Dark Void was also released on April 21, 2010.

The games make use of a unique "vertical cover system", as well as a standard cover system. The game includes a hover pack, and later, a jetpack, allowing for a quick transition between traditional shooter gameplay and flight. Everything unlocked in the first play through is transferred over to any new play throughs. Upgrades are purchased using Tech points through a shop at the start of every level before gameplay begins. Tech points are collected from defeated enemies and are hidden throughout the level.

The game's story takes place before World War II and centers around a cargo pilot named William Augustus Grey (voiced by Nolan North) who is teleported to another world while flying through the Bermuda Triangle and flying through a Watchers tunnel. In this world, known as the 'Void', Will encounters an alien race as well as other humans, which are known as the Watchers and the Survivors respectively. Will reluctantly joins the Survivors, who are engaged in a feud with the alien race, to satisfy his desire to return to Earth. While aiding the Survivors, Will discovers that the Void is a middle ground that connects both the Watchers' homeworld and Earth. It also becomes apparent that the Watchers are supplying the Axis powers with various wartime provisions for reasons unknown. With the help of Nikola Tesla, Will uses retrofitted Watcher technology to combat the Watchers and eventually find a way to escape the Void.

Bear McCreary, making his video game score debut, composed the score to Dark Void. He recorded the score with a 63-piece ensemble of the Hollywood Studio Symphony at the Eastwood Scoring Stage.

A spin-off title for DSiWare called Dark Void Zero was released in North America on January 18, 2010 and in the PAL region on March 5, 2010. Setting it apart from the next-gen version, the game was designed as a retro title featuring 8-bit graphics and sound, with 2D gameplay in the same vein as the Metroid games. To promote the game, a history of the game was created in which it was a title Capcom was developing to be a breakthrough NES property in the late 80s, but was shelved with the discontinuation of the PlayChoice-10 and the coming of the SNES. This history also appears in-game during the introduction. Additionally, before starting the game, players must use the DSi microphone to blow the cartridge's "contacts", a homage to the age-old method of getting non-working NES games to play. Capcom manager Seth Killian said Dark Void Zero started development after finishing the pre-release copy of Dark Void, inspired by the 8-bit music McCreary provided for the ending credits. Dark Void Zero was also released on the iPhone and Windows platforms on April 12, 2010. Both versions have an all-new secret ending. The Steam version has an additional ending (for a total of three possible endings), Steam Achievements, online leaderboards, and a SecuROM 5 machine activation limit.

The game received "mixed" reviews on all platforms according to the review aggregation website Metacritic.

IGN said, "Dark Void is one of those games you'll play, beat, and forget ever existed." Game Informer said that "the shining strengths of the game are buried underneath a thick layer of rust that only the thirstiest of air-junkies should bother chipping through."

GameZone's Louis Bedigian said of the PS3 and Xbox 360 versions, "The generic Gears of War-style shooting is forgivable. But the countless technical problems all but destroy a game that had the potential to be something truly special. Dark Void can be summed up in just six words: so much potential, so much disappointment." Hardcore Gamer praised the innovative jet pack but stated that the game "winds up being less than the sum of its parts," and that Dark Void is "not something you need to have in your collection."