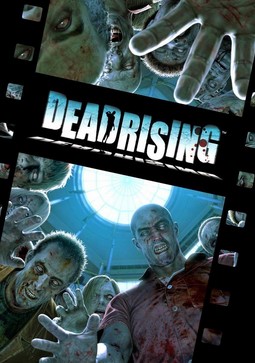 
Dead Rising (デッドライジング Deddo Raijingu) is an open world survival horror beat 'em up video game developed and published by Capcom, and is the first entry in the series of the same name. The game's story sees players controlling Frank West, a photojournalist who becomes trapped in a shopping mall within the town of Willamette, Colorado that is suffering from a zombie outbreak, and finds himself not only surviving by salvaging various items for weapons, but also rescuing survivors trapped in the complex and dealing with crazed psychopaths, while attempting to stay alive to uncover the truth behind the incident. While players must complete major missions to advance the main story, the sandbox element of the game means that optional tasks can be done, with several additional endings available if the player doesn't complete certain conditions towards the true ending of the story.

Originally released for the Xbox 360 video game console on August 8, 2006, the game became a commercial success, leading it to being introduced as part of the Xbox 360 "Platinum Hits" lineup, while also spawning three sequels - Dead Rising 2 in September 2010, Dead Rising 3 in November 2013, and Dead Rising 4 in December 2016. A remake of the game was made for the Wii, entitled Dead Rising: Chop Till You Drop, and released in February 2009, with a mobile phone version also created. As part of its tenth anniversary, the game was re-released on September 13, 2016 for Microsoft Windows, PlayStation 4, and Xbox One.

Players can operate the game in one of two modes. 72 Hour Mode is the main mode and the only one available to players to begin with, in which the main objective is to investigate the Willamette Parkview Mall within 3 days, before Frank can be rescued by helicopter, completing a series of "Case Files" - major missions that, when completed, advance the game's main story. If the player fails a Case File, the game does not end, allowing the player to merely explore the mall instead until the mode is up, though failure to comply to certain conditions (primarily associated with Case Files) will result in then earning a different ending.

Completing all the Case Files by the time 72 Hour Mode is over, will unlock "Overtime Mode" which players automatically begin, where the main objective to complete Frank has one more day to complete an additional set of objectives within the mall. The second mode, ∞ (Infinity) Mode, is unlocked after completing Overtime Mode and allows players to roam around the mall in sandbox mode without any time limit, with Frank merely trying to survive as long as possible.

To survive in all modes, players need to find and seek out weapons scattered around the mall that they can use against the zombies. Over 250 items are available to use in combat; they can be found anywhere, such as in stores, and fall under two categories, melee and ranged, with all ranging from the powerful, to the near-useless. The weapons and other items are firearms, sports equipment, children's toys, furniture, construction tools, electronic devices, and various bladed objects. Frank can carry only a limited number of weapons - baseball bats, 2x4 planks, hammers, pistols, shotguns, and so forth, though he can carry multiple versions of the same type. Also, he can use them only a limited number of times before he must find new ones, as melee weapons eventually deteriorate and break, while guns must be discarded when out of ammunition. Some weapons can be changed by the environment - frying pans can be heated on a stove both to increase damage and grant access to a special move - while others are large objects that Frank cannot store in his inventory and which he will drop if he picks up or switches to another item. Many of the less useful weapons exist purely for humorous effect. For example, the toy Megabuster, from Capcom's Mega Man, shoots tennis balls; traffic cones are simply put over a zombie's head, causing it to stumble about blindly.

Items other than weapons are available. Frank can try out various outfits from the mall's clothing stores - such as a Special Forces uniform, wrestling boots, a hockey mask and Mega Man X's armor. He can carry around certain books that can confer bonuses, such as increasing the durability of weapons. He can consume food and drink scavenged while exploring to recover health, or blend them together to make different "juices", which have temporary effects on the player. In Infinity Mode, players need to eat food to stay alive, as Frank's health drops every 100 seconds. They cannot access the supermarket within the mall, and food items are limited, but they can acquire weapons and food items from all characters; survivors are hostile to them in this mode.

Dead Rising incorporates an element of RPGs in the form of an experience system, in which completing various actions will reward Frank with "Prestige Points" (PP). While in both modes, killing large number of zombies can earn PP, so too can taking photographs. Any photograph that Frank takes in the game is automatically scored based on five "genres" - horror (zombies and graphic gore), outtakes (humorous events or scenes), erotica (photos of female survivors or zombies, particularly those focusing on the breasts and crotch), drama (dramatic events, such as the survivors' reactions while in the security room), or brutality (deaths of zombies and other characters) - with the score converted into PP. In addition to these actions, both 72 Hour Mode and Overtime Mode award PP for completing Case Files, and completing the optional task of rescuing survivors within the mall, and defeating "psychopaths" - boss characters who have either been driven insane by the zombie attacks, or are using the outbreak as cover for their own purposes. Once enough PP is earned, Frank will level up, resulting in upgrades to either attack power, running speed, throw distance, health, or to the number of items Frank can carry in his inventory, while new moves can also be unlocked, which boost his effectiveness with hand-to-hand combat. Any experience, levels, and unlocked moves earned in a playthrough will automatically be carried over into a new game should the player choose to restart, which can make subsequent playthroughs much easier.

All games from the serie "Dead Rising"