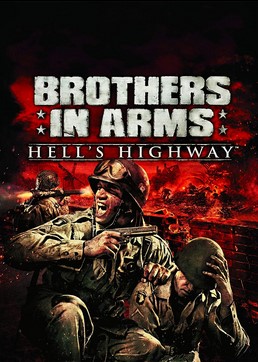 Brothers in Arms: Hell's Highway is a World War II-themed tactical shooter played from both first person and third person perspectives. The object of Hell's Highway is to guide player character Sgt. Matthew Baker and the squads under his command as they complete objectives during Operation Market Garden. In campaign mode, players must complete a series of levels that encompass Hell's Highway's storyline. The player can select from three levels of difficulty: Casual, Veteran, and Authentic. Completing the campaign grants players access to Authentic difficulty, which increases the enemy's accuracy and disables the heads-up display (HUD), as well as the player's crosshairs.

Combat in Hell's Highway is squad-based and retains much of the gameplay from its predecessors. The player has direct control of Baker while the squad members are controlled by the game's artificial intelligence. As players progress throughout the storyline, a maximum of three squads may accompany them into the battlefield. Three squad variations are available, each with their own strengths and weaknesses; for example, fire teams are proficient in suppressing the enemy, while assault teams are preferred for flanking maneuvers. The player may issue commands to the squads, such as sending them to take cover or focus their fire on an enemy position. A red circle above enemies shows when they are a threat. When the player issues an order for suppressive fire, the circle turns grey, indicating an opportunity for the player or squad to move to an improved flanking position.

The game features a cover system, which allows players to strategically hide behind objects while fighting enemies, and alternates the player's view to an over the shoulder perspective, similar to a third-person shooter. Hell's Highway features a destructible cover system, allowing objects such as wooden fences and sandbags to be destroyed by gunfire or explosives. Unlike the previous entries in the series, a regenerating health system is present, justified as representing a character's exposure to "threat" rather than resilience to damage: when the player's character is exposed to enemy fire, the screen turns red and blurry. If he remains under fire, he will eventually be hit and killed. Remaining safe from enemy fire will quickly remove "threat."  Gamplay also introduces the "action camera" feature which sometimes momentarily slows down time when a player kills an enemy with a headshot or grenade.

On July 29, 2008, Brothers in Arms: Hell's Highway was published by Presidio Press as a companion novel for the video game by the video game's historical director, Colonel John Antal, who served in the United States Army and retired after 30 years.

All games from the serie "Brothers in Arms"

View all games "Brothers in Arms"