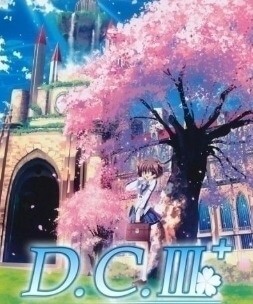 Da Capo III (〜ダ・カーポ III〜 Da Kāpo III, abbreviated as D.C. III) is a Japanese visual novel developed by Circus that was released in limited and regular editions on April 27, 2012 as a DVD for Windows and is rated for ages 15 and up. It is the third main installment of the Da Capo visual novel franchise, after Da Capo and Da Capo II. The story takes place 20 years after the events from Da Capo II. The gameplay in Da Capo III follows a branching plot line which offers pre-determined scenarios with courses of interaction, and focuses on the five female main characters. A 13-episode anime adaptation aired between January and March 2013.

Da Capo III is a romance visual novel in which the player assumes the role of Kiyotaka Yoshino. Much of its gameplay is spent on reading the story's narrative and dialogue. Da Capo III follows a branching plot line with multiple endings, and depending on the decisions that the player makes during the game, the plot will progress in a specific direction. There are five main plot lines that the player will have the chance to experience, one for each of the heroines in the story. After the completion of the first four heroine routes, an additional scenario called Zero is made available, which revolves around Aoi Hinomoto, another heroine of the game. After Zero is finished, another route is made available. Throughout gameplay, the player is given multiple options to choose from, and text progression pauses at these points until a choice is made. To view all plot lines in their entirety, the player will have to replay the game multiple times and choose different choices to further the plot to an alternate direction.

Da Capo III occurs about 20 years after Da Capo II on Hatsune island, once famous for its everlasting cherry trees. Ricca Morizono, president of Kazami Academy's official newspaper club, is determined to prove the existence of magic along with Kiyotaka Yoshino, the only male member of the club. There are four other girls in the club: Himeno Katsuragi, Kiyotaka's childhood friend; Charles Yoshino, Kiyotaka's cousin; Sara Rukawa, a transfer student; and Aoi Hinomoto, a frail but energetic part-timer. One day, Ricca suggests they should visit the rumored magical cherry tree to test its power by making a wish together. It suddenly blooms once again to their surprise, and all receive an unknown text message from the distant past. The official newspaper club challenges the unofficial newspaper club to see who can write a better article based on magic. However, the girls start to be distracted by Kiyotaka. Kiyotaka begins to suspect a particular girl who resembles the fabled principal Sakura Yoshino.

Da Capo III is the 52nd title developed by the visual novel developer Circus. The game's production was headed by Tororo, president of Circus. The scenario was written by two people: Kōta Takeuchi and Chihare Ameno, who is also the game's director. Character design and art direction for the game was split between two artists: Natsuki Tanihara and Yuki Takano. Music in the game is performed by four artists: CooRie, Yozuca, Aimi Terakawa and Suzuko Mimori.

Da Capo III was first announced on November 1, 2009 at Circus' 10th Anniversary Premium Concert and Announcement event as one of the ten Da Capo-related announcements made at the event, and was formally unveiled in the August 2011 issue of Dengeki G's Magazine. Da Capo III was released on April 27, 2012 in limited and regular editions, playable as a DVD for Windows and is rated for ages 15 and up. The limited edition came bundled with an original illustration booklet, the game's original soundtrack album, and a promotional card from the Weiß Schwarz collectible card game.

MangaGamer released a demo of an English version of Da Capo III for Linux, macOS and Windows on December 23, 2016, and the full version was released on January 20, 2017 in both all-ages and adult versions. The all-ages version was also released on Steam.

All games from the serie "Da Capo"