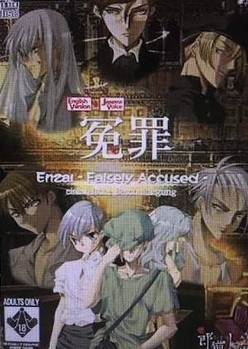 Enzai (冤罪, lit. "False charge") is a yaoi game made by the Japanese software house Langmaor, which was later translated to English under the title Enzai – Falsely Accused. It was the first yaoi game released commercially in the United States. The game is also the first that Langmaor developed.

The story is set in post-revolutionary France in early 19th-century. Although the specific date is never given, Napoleon Bonaparte is still in power. One character remarks that it is several years before the 20th anniversary of the French Revolution, placing the game's events in the years before 1809.

The protagonist is Guys, a young boy from a poor family, who gets caught stealing candy from a Paris store. However, after being railroaded by a city detective named Guildias, Guys finds himself accused, convicted, and sentenced to life imprisonment for the murder of a man he never met.

From that point on, most of Enzai takes place inside a dark, claustrophobic, dirty prison. In there, Guys experiences humiliation and torture of various kinds, much of it involving nonconsensual sexual acts.

The primary goal of the game is for the player (as Guys) to locate evidence and witnesses that can exonerate him of the murder, unveil the true killer, and get him released from prison. Secondary goals include learning the killer's true motives, finding out the backstory of the murder, keeping Guys both physically and psychologically healthy, and forming a romantic bond with other male NPCs in the prison.

Game interaction is extremely limited, as Enzai is a visual novel. Most of Enzai's gameplay consists of reading text and seeing stationary artwork. Player input is limited to, at a few junctions in the story, the ability to choose one of two paths. The choices selected affect which ending the player gets. The nature of the gameplay, and the incomplete revelation of the aspects of the main conspiracy, means the player doesn't find out the entire conspiracy until they have completed all endings and unlocked all the scenes.

While there are eleven endings, only seven of these are "official" endings that can be unlocked and re-experienced in the option menu.citation needed

There are, in fact, two unrelated conspiracies—one with Durer, Bollanet, and most of the prisoners, and another involving Guys, Guildias, and his imprisonment. In the game, it appears that Durer is aware that Guys is innocent, and that Guildias is corrupt, and vice versa. Durer and Guildias thus are partners in the evil prison system.

The game has a number of possible endings, some where Guys dies in unsuccessful attempts to escape from prison, some where he succeeds in proving his innocence, as well as endings where he remains in prison for life.