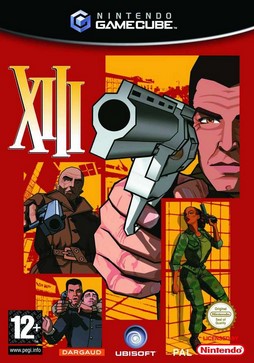 XIII, (pronounced "thirteen") is a first-person shooter video game developed by Ubisoft Paris and published by Ubisoft for most platforms except for the OS X version, which was published by Feral Interactive. Loosely based on the first five volumes of the 1984 Belgian graphic novel series XIII, the protagonist Jason Fly (XIII) is a confused and amnesic man who searches for his identity throughout a comic book-style, cel-shaded world. Found stranded on a beach by a lifeguard, Fly is accused of having killed the President of the United States. The accusation later transpires as mistaken, as Fly finds himself facing a gang of 20 conspirators ("The XX") who aim to overthrow the government. The Xbox version of the game was developed by Southend Interactive, while the OS X version was developed by Zonic.

The game was released for Microsoft Windows, PlayStation 2, Xbox, GameCube, and OS X. A reimagining of XIII, the point-and-click adventure game XIII: Lost Identity, was released on October 17, 2011 for PC, Mac, iPhone and iPad.

The story begins with an introductory sequence depicting the assassination of the President of the United States, William Sheridan. The protagonist, Jason Fly (voiced by David Duchovny), awakes on Brighton Beach in Brooklyn, New York City. Badly wounded, he is rescued by a lifeguard and is brought into a beach house. He has lost all his memories and all that he possesses is a locker box key. He also has a tattoo with the Roman numeral XIII on his right shoulder. He is then attacked by unknown assailants, led by a hitman known as The Mongoose, with whom Fly does battle several times throughout the game. However, he is later instead arrested by the FBI as a chief suspect in the murder. A photo proves that he resembles the murderer. XIII succeeds in escaping the headquarters with the aid of a female soldier, Jones. One of Fly's few other allies is Ben Carrington: an old war veteran and superior to Jones, Carrington knows valuable information about the President's death and is willing to help XIII. However, he is arrested and brought to a military station in the Appalachian mountains to be silenced by the conspiracy. XIII must infiltrate the base and free Carrington if he is to learn about his past.

In the following story, the player learns that the protagonist adopted the identity of the murderer. The murder is part of a conspiracy that aims to overthrow the U.S. government. The twenty conspirators have numbers to mask their identities, and collectively name themselves "The XX". XIII was one of them, but was later betrayed and murdered by The XX. With the objective of preventing a coup, one of the members took on the appearance of XIII to confuse the opposite side and force it to make errors. The protagonist, in the guise of the early XIII, is successful in uncovering most of the conspirators, killing them and hindering the conspiracy. The game ends with a cliffhanger, when Fly confronts Walter Sheridan—brother of the assassinated President and apparent (though unconfirmed in the game) leader of the conspiracy—on a ship, followed by a promise of a sequel.