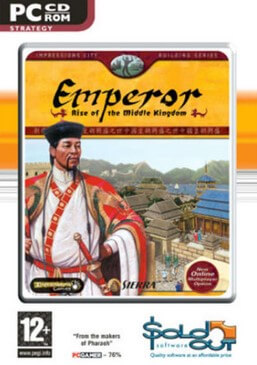 Emperor: Rise of the Middle Kingdom is the sixth title in the City Building Series. BreakAway Games was contracted for Emperor after having previously worked on Queen of the Nile. Emperor is the last of the series to use the same 2D-sprite game engine as seen in the earlier titles, and the first to introduce a multiplayer option.

Not unlike the earlier games, Emperor focuses on the building and development of a city in ancient times, this time Ancient China, from the Xia Dynasty (2033 BC) to the Song-Jin dynasties (1234 AD).

The most basic task in each mission is to maintain the city. This involves keeping the populace well-fed, healthy, and safe from hazards. If food and basic goods and services are provided in abundance, the city will eventually improve. Beyond this, the player must manage trade and taxes in order to fund further development and expansion.

In the meantime, the player may elect to make offerings to the ancestral heroes. Principally, offerings are made to appease the heroes and prevent them from becoming angry and inflicting disasters upon the city. But heroes can also be made very happy, which can prompt them to visit the city and confer benefits to it.

Beyond the city itself, the player must pay heed to rivals and enemies. Troops and guards are necessary to protect the city from military invasions and subterfuge. The player can build defensive walls and man them with archers for improved defense.

Eventually, the player may be required to build monuments, which are costly both in time and materials, giving enemies an opportunity to take advantage of possible weaknesses. As such, building a monument generally requires that the city first establish a strong economy and military.

The seven campaigns of Emperor span nearly 3300 years of classical Chinese history, from the Xia Dynasty to the Jin dynasty. Notable monuments that can be built include the Great Wall of China, the Grand Canal connecting the Yellow and Yangzi Rivers, and the Terracotta Army. In the first campaign, the player is simply a humble villager elder, in charge of leading a nomadic tribe to settle down along the river. In the final levels, the player is servant to the Emperor of China, and oversees the construction of the Imperial capital Zhongdu (modern-day Beijing) and fortifying its defense to foil the invading Mongols and their leader, Genghis Khan.

Foodstuffs, technologies, and religions evolve over the centuries, closely matching the actual history of Chinese culture. Because players serve several dynasties and Emperors throughout the game, they will not always be building the same city. Often, they will be sent to build up a new city, or be sent back to a previous city to accomplish a new goal. In some cases, a city may be revisited after centuries have passed, having changed dramatically or fallen into ruins during the intervening years.

Players may play the campaigns in any order they choose, though the difficulty level ramps up parallel to the chronology. Often the objectives involve producing a set amount of a commodity, conquering other cities, achieving a certain population level, or building a monument.

(0) Comments on "Emperor: Rise of the Middle Kingdom Full Version"