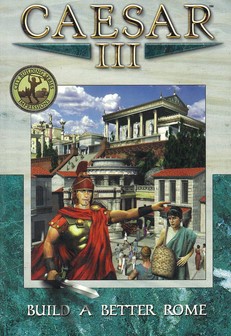 Caesar III is a city-building game released on September 30, 1998 for Microsoft Windows and Mac OS, developed by Impressions Games and published by Sierra On-Line. It is the third installment of the Caesar series of games and is part of Sierra's City Building series. Players take on the role of a Roman governor, tasked with building up a grand Roman city, in which they must ensure their citizens have their needs met, that their city is safe and profitable, while meeting various goals set for them and dealing with various disasters, angry gods and hostile enemies.

The game is played through a two dimensional isometric perspective, set to a fixed magnification level that can be rotated, but only by ninety degrees either clockwise or counter-clockwise. Players use an interface system to design a city, including buttons for different aspects of building such as Housing, Religion and Security, amongst others; for some, an additional menu is provided of buildings available to the player. While some construction work, like building a road, simply require the left mouse button being held down and then released when the layout is right, most structures are of a fixed size and simply need to be put down where space is available; some obstacles (man-made or natural) can be cleared away, but others cannot except in the game's editor (see "Editor" below). Additional buttons for viewing messages (recent or old), undoing recent building work, and moving to any trouble spots that have begun to occur (such as an invasion), are also provided, while the interface also includes a mini-map of the current region being built in. Various options, including being able to tune how fast the game is going and what difficulty it can be played at, are also accessible in drop-down menus.

To assist further with city building, players have access to an "Empire Map", which can be used to set up trade with other Roman cities and keep tabs on incoming invasions. Players are also provided with a series of advisers who can help with them with various aspects of city life, including a general overview adviser who can give a quick summary of each aspects, with any problems needing attention highlighted in red text (i.e. How much unemployment there is).

In-game overlays can be accessed that can highlight various elements, such as access to a service or problems, while messages about any issues or matters are provided, with important ones opened automatically, whilst some significant events, such as city milestones or messages from the Roman Emperor, receive a short video clip to them. The game's background music notably changes according to the situation of the city's size, or if an invasion is happening. All aspects of city life featured in Caesar III, from homes to religion, to trade and to warfare, are designed carefully to closely reflect that of actual Roman cities, in terms of the goods and services available during their time as well as the way of life that Roman citizens had.

A few weeks after the game was released, Sierra made an Editor available on their website. The editor allows players to produce their own scenarios from over twenty city locations, as well as choosing the identity of invaders (with new inclusions such as the Huns, Seleucids, Macedonians and Jews), the available buildings, and everything that would appear on the map itself. The Caesar III page on Sierra's website is now down, but the Editor is still available for free download from GameSpot and the HeavenGames fan site, and was also distributed with later releases of the game.

Caesar III was a commercial success. It shipped 150,000 copies in its first month of release, at which time it was on track to top the sales of Caesar II. In the United States, the game took 10th place on PC Data's weekly computer game sales rankings for October 18–24, 1998. It was absent from the top 10 the following week, but ultimately claimed ninth place for the month of October as a whole. According to PC Data, sales of Caesar III surpassed 93,000 units in the United States alone by February 1999. In the German market, Caesar III had spent 10 weeks on Media Control's computer game sales charts by early 1999, with placements of sixth and ninth for the first and second halves of January, respectively. Late that year, the Verband der Unterhaltungssoftware Deutschland (VUD) gave Caesar III a "Gold" award for its commercial performance through September 1999, indicating sales of at least 100,000 units across Germany, Austria and Switzerland.

Caesar III's global sales had surpassed 400,000 copies by January 1999. That April, Sierra's Jim Veevaert announced that the overall Caesar series, including Caesar III, had sold "well over one million units" globally. According to designer David Lester, around 2.5 million copies of Caesar III were ultimately sold worldwide.