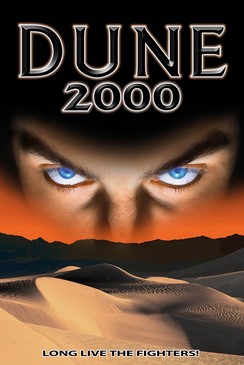 Dune 2000 is a real-time strategy video game, developed by Intelligent Games and released by Westwood Studios in 1998 for Microsoft Windows. It was later ported to the PlayStation in 1999. It is a partial remake of Dune II, which is loosely based on Frank Herbert's Dune universe. The story of the game is similar to Dune II, and is continued in Emperor: Battle for Dune. The game uses a similar game engine to Westwood's Command & Conquer: Red Alert. Although Dune 2000 was originally intended to be a remake of Dune II, the plotline differs completely and makes a reference to the execution of Mentat Amon of House Ordos and the replacement of the Harkonnen Mentat from Dune II, Radnor, by Hayt De Vries. The story is told with full motion video.

Emperor Corrino (Adrian Sparks) has issued a challenge that the House which can produce the most spice will control its source, the desert planet Dune, with no rules as to how the Houses can achieve the goal. Meanwhile, Lady Elara (Musetta Vander) of the Bene Gesserit and bound concubine to the Emperor, secretly takes the commander - the player - into one of the Heighliners, a person whose bloodline and future the Sisterhood had checked. According to Elara, they saw many visions of the commander dying —and only in one vision does the commander live and even rise to control massive armies and bring peace to Arrakis.

As in Dune II, the three main playable factions are House Atreides, House Harkonnen and House Ordos. There are also four non-playable subfactions: House Corrino, the Fremen, the Mercenaries and the Smugglers.

In Dune 2000, the player commands of one of the three Houses and must fight for control of the spice mélange on the planet Arrakis, or Dune. The player harvests spice for 'solaris', the in-game currency, and uses the solaris to make units to supply their forces. The game uses a similar engine as Command and Conquer: Red Alert, where, unlike in Dune II, the player can control more than one unit at a time.

Like most real-time strategy games, the game map initially starts with a black fog of war covering the entire map, with an exception to units' line of sight. As the units explore the map, the fog is removed for the duration of the mission, allowing the player to observe activity in those regions even if they do not have any units with line of sight to them. Like Dune II, the player may construct concrete before placing buildings. In Dune II, all buildings would deteriorate regardless, but the concrete foundations slowed the process. However, in Dune 2000, the buildings do not deteriorate over time when built in their entirety on concrete.

Although each house has many common units, such as infantry, Wind Traps, and Mobile Construction Vehicles, each House also has its own set of units, such as the Atreides Sonic Tank, the Ordos Deviator and the Harkonnen Devastator. Houses Harkonnen and Atreides share the Trike, while House Ordos has an upgraded version, the Raider. Like many games of the Westwood franchise, a player can gain access to other Houses' special units by capturing an enemy building that can manufacture the desired units. House Ordos can obtain the Missile Tank by ordering it from the Starport when it would otherwise be inaccessible. After patch 1.06, the Harkonnen can eventually train the Sardaukar, which are soldier-fanatics loyal to the Corrino Emperor.