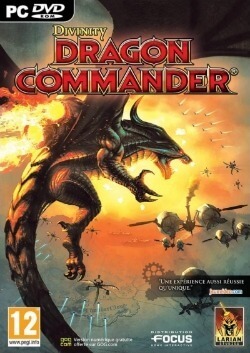 
Divinity: Dragon Commander is a real-time strategy video game developed by Larian Studios as part of the Divinity series of fantasy role-playing games. The game features a hybrid of gameplay styles and has single-player, competitive multi-player, and co-operative multi-player modes.

The gameplay of Divinity: Dragon Commander is broken up into three phases which affect each other. The first phase has elements of a political simulation, where the player has conversations with multiple non-player characters and makes political decisions which affect the gameplay in the other two phases. In this phase, the player can research abilities, influence factions, and receive cards which can be traded in for special effects in the other two phases.

The second phase of the game is in the style of a turn-based strategy game, based on board games like Risk, and designed first as a board game while the game was still in development. In this mode, the player can use cards earned in the RPG phase to affect their own territories and units or those of their enemies. The player can also construct one building per territory, and recruit and move units. Once the units of two opposing sides meet, the player can play cards which take effect only for that battle, and can choose whether to automatically resolve the battle, or choose to fight themselves. The player can only fight in one battle per 'round' (a full set of the three phases).

The third phase of the game takes place once a battle is joined and is in the style of a real-time strategy game. The player constructs buildings and recruits units from the population pool of the region where the battle takes place. All construction and recruitment is done through units of recruits, which increase at a slow rate until the area's population is depleted. A player can increase the rate of recruitment by capturing and building more recruitment stations. Aside from the traditional point-and-click based style of control, the player can also take the form of a dragon in battle and aid their units in both offense and defense, at the cost of sacrificing some control over their units while in dragon form.

The game takes place in the distant past of the previous Divinity games. The player character is the bastard son of a recently deceased emperor. While arguing over succession rights, the emperor's children make a deal with a demon which allows them to introduce new, steampunk-styled technology to the world. Maxos, a powerful wizard who featured in Divinity 2, comes to the player character as the only pure heir remaining, and asks him to enter the fight and win the war so that the demonic technology can be destroyed.

The story in the game follows this overarching plot, while from turn to turn, the player is confronted with political and personal issues from their ambassadors and generals. The ambassadors represent the non-human races, namely the Undead, the Elves, the Dwarves, the Lizardmen and the Imps. Each roughly represents a political viewpoint, and many of the political decisions are taken from modern politics. For instance, the player can decide whether or not to create a don't ask, don't tell policy in their army, and their decision will affect the relations between the player character and the various races.

Critical response to Dragon Commander has been generally positive. The GameSpot review called the game a "gem", praising its many gameplay mechanics individually along with the visuals and audio. The Escapist awarded the game 3 stars out of 5 and criticized the strategy portion of the game as subpar, but the reviewer found the role playing gameplay and the story enjoyable and interesting.