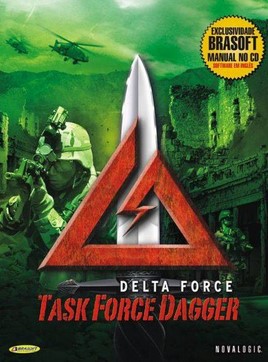 Delta Force: Task Force Dagger is a first-person shooter video game developed by Zombie Studios and published by NovaLogic. It's a stand alone expansion pack to Delta Force: Land Warrior. It is set in Afghanistan in the year 2002. As such it is the first game in the series to be set in a real-world conflict.

Task Force Dagger is based on the same engine as the previous Delta Force title, Land Warrior, and retains all of its gameplay mechanics. The largest difference is that the player can now choose to control a character from either one of ten available special operation units, including SEAL Team Six, the Green Berets and the Special Air Service. All of these have individual advantages and disadvantages, such as some operatives being formidable snipers while others are able to sustain larger amounts of damage. However, mechanically these factions are identical to the different playable Delta Force operatives available in Land Warrior. Unlike the earlier games, Task Force Dagger usually sends the player on missions alone, without any support form AI-controlled friendly soldiers.

Like all earlier Delta Force titles, Task Force Dagger has a larger focus on realism than is common in the first person shooter genre. Most of the gameplay takes place in large outdoor environments with combat distances of up to several hundred meters, and bullet ballistics have to be taken into account when aiming at distant targets. Typically for the series, characters usually die from a single hit. Like Land Warrior, Task Force Dagger also prominently features combat in narrow underground tunnels.

As before, the missions are comparably open-ended, only requiring the player to fulfill specific objectives while allowing him to manoeuvre freely on the maps. Objectives usually involve eliminating all hostile presence in an area or destroying military equipment such as SCUD launchers and ammunition depots. Before each mission the player is able to customise his weapon loadout but can later replace weapons with ones dropped by killed characters or access weapons caches to re-equip himself on-mission.