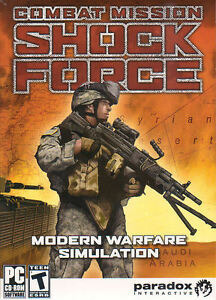 Combat Mission: Shock Force is a video game by American studio Battlefront.com in the Combat Mission series of games that covers a fictional United States invasion of Syria, focusing on U.S. Stryker brigades. It was released in 2007, marking the debut of the CMX2 game engine, the second generation of Combat Mission games.

Shock Force depicts fictional battles in the year 2008 between the Syrian Army and US Stryker Brigades. This is the original incarnation of Battlefront.com's Combat Mission series using the new CMX2 game engine. Shock Force features improved graphics and 3D modelling. Modelling of infantry features a 1:1 representation, where every single soldier is depicted in the 3D world by its own animated graphic. The new engine also features real world lighting conditions, and models sun and star positions in the sky. The engine allows the game to be played in real time in addition to the established 60-second incremental format.

Each scenario in the game contains forces drawn from either the US or Syrian Regular Army units utilizing Soviet-bloc equipment such as AK-47 assault rifles and T-72 tanks, with "blue vs. blue" and "red vs. red" scenarios also possible. "Insurgent" units are available as a sub-selection, representing guerrilla forces drawn from the Syrian population.

The game shipped in a jewel case with a DVD-ROM and a printed manual. "Special Edition" versions shipped with a printed full-color poster of Syria with unit dispositions of the fictional invasion from the "Task Force Thunder" campaign marked on it, as well as a custom printed mouse pad.

Game content included a campaign of several linked scenarios, pre-made scenarios ("battles"), and maps for the "Quick Battle" system which permitted random play in one or two player mode. The game shipped with a fully operational map and scenario editor as well as a campaign creation tool.

The game received "mixed" reviews according to the review aggregation website Metacritic. GameSpot's review started with the tag line "Combat Mission says good-bye to WWII, but hello to an inept interface, broken AI, and hideous visuals."

GamingShogun reviewed a later version of the game after several patches and stated it was "one of the most fun battle simulations" they have ever played.