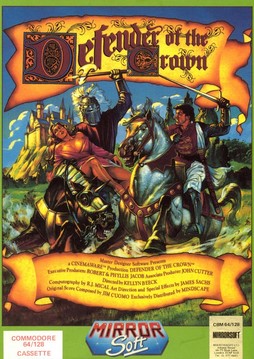 Download Defender of the Crown Free for PC Torrent

Defender of the Crown is a strategy computer game designed by Kellyn Beck. It was Cinemaware's first game, and was originally released for the Commodore Amiga in 1986, setting a new standard for graphic quality in home computer games.

In 1987 it was ported to MS-DOS, the Nintendo Entertainment System (NES), Atari ST, ZX Spectrum, Amstrad CPC, Commodore 64, Macintosh and finally, the Apple IIGS in 1988. It was later ported to the CDTV, CD-i, and then the Atari Jaguar.

The game is set in England in 1149 during the Middle Ages where, following the death of the king, different factions are fighting for territorial control.

The player assumes the role of a Saxon (Wilfred of Ivanhoe, Cedric of Rotherwood, Geoffrey Longsword or Wolfric the Wild) and tries to fight off the Norman hordes and wrestle for control of England. Eventually, the player must fight for control of all territories, and potentially those controlled by other Saxons, if they have become antagonistic. The player must amass armies and fight for control of opponents' castles. The player may engage enemy armies in battle, loot or lay siege to opposing castles. Territories can also be won in the periodic jousting contests. From time to time the player may attempt to rescue a damsel in distress and can appeal for help from the legendary bandit Robin Hood.

The game's strategy boils down to a war of attrition as the player tries to amass larger armies than his opponents and manages to attack their territories at the right time.

Due to financial strains, Cinemaware decided to release the initial version without all the features originally planned for because of their need for revenue. Some features were partially implemented, but were removed so the game could be shipped. Some additional features completed but never seen in the shipped game include flaming fireballs (launched via the catapult), more locations (more varied castles to attack) and more in-depth strategy. Some of these features were implemented in the ports of the game.

James D. Sachs, the primary artist for the game, showcased some of these features on the Amiga during interviews after the release of the game.

The first public demonstration of Defender of the Crown occurred at the Los Angeles Commodore Show in September 1986, before its November release, and attracted a huge crowd. An excerpt from Brian Bagnall's On the Edge: the Spectacular Rise and Fall of Commodore captures the effect that seeing the game for the first time had on users:

Info gave the Amiga version four stars out of five, stating that its "graphics have set new standards for computer games". The magazine praised the "breathtaking" animation and "impressive" color, but hoped that future Cinemaware games would improve on the "adequate" gameplay which was "the weak link". The Australian Commodore Review gave the Commodore 64 version of the game a total score of 96 out of 100, while Commodore User said that it was "totally brilliant and one of the best games to date on the 64." Computer Gaming World praised the Amiga version of Defender of the Crown's graphics and animation, calling the game "a showcase program to demonstrate the power of the Amiga to your friends." Although the gameplay was not as complex as other strategy games of the time, the reviewer was still exceptionally pleased with Cinemaware's first game. That year the magazine gave Defender of the Crown a special award for "Artistic Achievement in a Computer Game", but in 1990 and 1993 surveys of wargames in the magazine gave the game two-plus stars out of five.

Compute! also stated that Defender of the Crown effectively demonstrated the Amiga's graphics but stated that its gameplay was oversimplified. CU Amiga stated that "there are not many areas in which Defender of the Crown could be improved ... the graphics are sophisticated with lush colours and visual effects." Amiga Format were less kind to the CD rerelease of the game, stating that it "hasn't stood the test of time simply because the gameplay is somewhat weak."

In 1996, Computer Gaming World declared Defender of the Crown the 92nd-best computer game ever released.

Defender of the Crown System Requirements

(0) Comments on "Defender of the Crown Full Version"