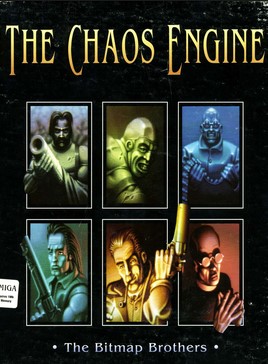 The Chaos Engine is a top-down run and gun video game developed by The Bitmap Brothers and published by Renegade Software in March 1993. The game is set in a steampunk Victorian age in which one or two players must battle the hostile creations of the eponymous Chaos Engine across four landscapes and ultimately defeat it and its deranged inventor.

It was first released for the Commodore Amiga, with a version available for AGA Amigas, and later ported to MS-DOS, the Super Nintendo Entertainment System, Atari ST, Amiga CD32, RISC OS and Sega Mega Drive platforms. In the SNES and Megadrive versions, the character The Preacher had his clerical collar removed and was renamed The Scientist. The U.S. versions of these two ports were retitled Soldiers of Fortune. A sequel to the game, The Chaos Engine 2, was released in 1996.

The setting is a steampunk Victorian era England. A time traveller on a reconnaissance mission from the distant future became stranded in England of the late 1800s, and his technology came into the hands of the Royal Society led by Baron Fortesque (based upon Charles Babbage), a grand inventor. Fortesque then retro engineered many of the futuristic contraptions, creating an entirely different, alternate timeline.

Baron Fortesque then succeeded in his greatest creation yet—the Chaos Engine—which was able to experiment with matter, and the very nature of space and time. Unfortunately for the rest of the proud kingdom, the Engine then proceeded to become sentient and captured and assimilated its creator, then began to change the countryside for the worse. Vile monsters and destructive automata appeared everywhere, and even prehistoric beasts were resurrected. Telegram wires connecting the British Isles to the European mainland are cut, and any ship attempting to enter a British port is attacked. The British Royal Family, along with members of Parliament and a large number of refugees manage to escape across the sea, bringing with them many tales of horror. The British Empire is left in tatters, and the world in economic and political chaos. This lures a number of mercenaries on a potentially rewarding quest to infiltrate the quarantined Britain, find the root of the problem and swiftly bring a full stop to it.

At the end of the cellars in the hall of machines, the player characters face the Chaos Engine itself in a last battle. Upon its destruction, the narrator of the game is revealed to be the Baron himself, trapped within the machine and studded with implants.

The introductory sequence is displayed in text on the screen on the floppy disk based Amiga versions, but a slightly modified version is narrated with a voiceover on the Amiga CD32 version, together with some scene-setting animations.

Players choose two mercenaries from a group of six to take on the task of defeating the mad Baron Fortesque and the Chaos Engine itself. The playable characters have various qualities that affect gameplay, such as speed and combat ability. The players are provided with a certain amount of money to start the game and must hire the chosen characters at their set prices.

In one-player mode, the computer artificial intelligence controls the second player, so that one never has to fight the chaos alone. Control of characters cannot be swapped once chosen. It is possible to play with only one character, by starting a two-player game and letting the enemies kill the second character.

The Navvie and Thug are the strongest and most expensive of the group. They have the highest health and most destructive specials but are slower than the other characters. The Navvie uses a bazooka, which fires straight ahead and does heavy damage; the Thug uses a shotgun, which is less powerful than the bazooka but fires many shots in a wide angle.

The Brigand and Mercenary are the all-rounded characters and have a mid-range price. Though they are slightly weaker than the Navvie and Thug, they have access to more specials and can move faster. The Brigand uses a rifle, which works the same as the Navvie's bazooka but is not as powerful. The Mercenary uses a Gatling gun that operates similarly to the Thug's shotgun, but with a different pattern.

The Gentleman and Preacher are the least expensive, with the highest movement speed and widest selection of specials; however, they have the lowest health. The Gentleman uses a flame pistol, while the Preacher carries a laser. Their shots are weaker than those of the other characters, but can pass through enemies after hitting them.

For the North American release, the Preacher character was redesigned slightly and renamed as the Scientist because the game's North American publishers felt that a priest killing people was offensive.