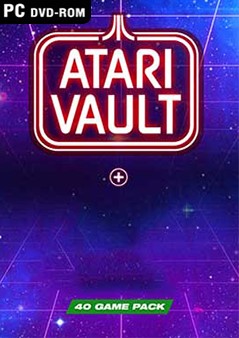 Atari Vault is a collection of one hundred video games that Atari had produced for arcade cabinets and its Atari 2600 home console system, dating from the 1970s, 1980s, and 1990s. The collection was developed by Code Mystics, who had helmed similar collections of Atari games to other platforms, to work on Microsoft Windows, macOS, and Linux via the Steam client. The games, where possible, have been updated to include modern-day features such as local and online multiplayer and online leaderboards.

Code Mystics handled the port, previously having developed the Atari Greatest Hits series for the Nintendo DS, a similar collection of games updated for a modern system. For Atari Vault, they have worked to ensure that the games in this title would be considered the definitive modern versions, according to developer Matthew Labunka. They spent time to obtain fine details on the look and presentation, such as getting digital imagery of the arcade cabinet art to present alongside the game screen. The updated versions will be running the original games' ROM image, wrapped into an emulator made in the Unity 5 game engine. In addition to original settings that were normally available to arcade players, the player can access options that were limited to the arcade cabinet operator, such as difficulty and length of a single play session. Art and related materials are also available for each game for the player to review.

Where possible, the games have been updated to include both local and online multiplayer, and games use Steam-based score leaderboards. The games have been tuned to use the Steam controller, enabling precise controls for the games, particularly for games that used trackball input devices, like Centipede. Code Mystics worked with Valve to fine-tune controller profiles for various games before release.