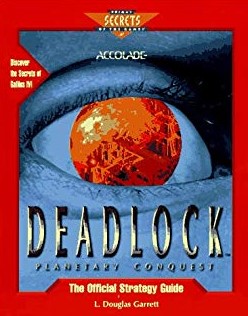 Deadlock: Planetary Conquest is a turn-based strategy computer game by Accolade. The game was officially released in 1996. The story revolves around eight races' struggle for control over the planet Gallius IV, which came to a deadlock. The races are Human, Cyth, Ch'Cht, Maug, Re’Lu, Uva Mosk, Tarth and Skirineen, although the latter are not a playable side.

Expeditions sent by the governments of eight races came to orbit around Gallius IV. An armed conflict ensued as each race was determined to capture the planet for its own purposes. To avoid an intergalactic war, as well as to prevent the disputed planet from being accidentally destroyed by the space fleets battling around it, a treaty called The Compact of Gallius IV was signed by seven of the eight races. Each of the seven would deploy five hundred lightly armed colonists to the planet, who would then each begin developing a colony. No restrictions were put on weapons developed and used by the colonies, as opposed to the colonists only being allowed to bring laser pistols with them. The colony to drive all others off the planet's surface, or to construct a pre-set number of cities, would claim the planet for its leaders. The recently discovered and neutral Tolnans serve as advisers to everyone, while the Skirineen operate the local black market. Below is the full text of the Compact.

The Compact of Gallius IV

"We, the leaders of the Cyth, the Ch'Cht, Human, Maug, Re'Lu, Tarth, and Uva Mosk, agree to stop hostilities in space. Since we all wish to claim the planet, Gallius IV, the conflict will be moved to the surface and resolved there.

Each race can drop one colony ship onto the planet. Five hundred colonists armed only with laser pistols may land. The colonies will have food, energy, iron, and wood.

There are no limits on weapons or technologies. The colony leaders should develop resources and military units as fits their strategy.

Intentional contact with the Skirineen is a direct violation of this treaty. Only Oolan, a Tolnan, may be contacted in space. She will give advice to all colony leaders.

Any colony that builds the agreed upon number of City Centers or drives the other colonies away, keeps the planet forever."

The game can be played against a number of human opponents (over the Internet), or against the computer. Before starting, the player picks one of seven races to lead, modifies the desired size of the planet, its basic geological make-up, the number of enemies, the number of City Centers required to claim victory and the landing site. The colony starts with a small population, which grows in size every turn. By constructing various kinds of buildings, collecting/producing resources and researching technologies, the colony can be greatly expanded. Each can field as big an army as it can support.

Military units are divided into sea, land, air and missile, each type produced by a different line of buildings. Specialists, such as spies, are trained in City Centers. Units can only be given combat orders in advance - the player is presented with a video recording of a battle after one has occurred.

There are two modes: the "world view", where the colony leader can move armies, trade resources with or attack other colonies, and the "settlement view", where colony management (such as town planning and building) takes place.

Capturing all of the other colonies’ territories or constructing a pre-set number of City Centers wins the game. The latter is much more difficult than it seems: each consecutive City Center is more expensive than the last.

Deadlock: Planetary Conquest consists of seven races, each having a unique ability.

The ChCh-t are a race of insectoids resembling mantises and scorpions. They have a hive mind with most activity revolving around the queen of each individual hive. The ChCh-t excel in construction so units and buildings are produced faster. The ChCh-t produce colonists faster and their housing units hold twice as many colonists. They suffer from slow researchers and weak military units but all military units are faster. ChCh-t scouts can steal resources from enemy colonies.

The Cyth are a race of goblin-like humanoids similar to the Illithid from Dungeons & Dragons. They are very in tuned to their psychic abilities, to the point where most Cyth no longer need to walk but use their psychic abilities to hover a few inches off the ground (They find walking to be uncivilized). This trait is enhanced by ingesting the juice of the egg sac of a spider from their home planet, which the Cyth do constantly through a face mask that almost all Cyth can be seen wearing. They are often regarded as “evil” which makes it difficult for them to form alliances with other races. Their command corps can use a “Mind Blast” technique that mangles enemy units. Cyth scouts can poison enemy territories which cuts that territory’s food production by half. Their morale is always fixed at 80%; this effectively prevents a fifth of the population from ever doing work, but enables the use of practices that would cause morale-lowering scandals with other races (such as oppressive taxation or black market dealings).