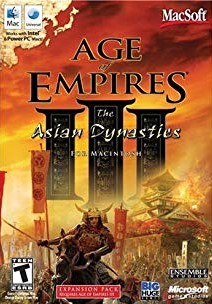 Age of Empires III: The Asian Dynasties is the second expansion pack for the real-time strategy video game Age of Empires III developed through a collaboration between Ensemble Studios and Big Huge Games, and published by Microsoft Game Studios. The Mac version was ported over, developed and published by Destineer's MacSoft. The game is the second expansion pack following The WarChiefs. The game introduces three new civilizations; China, Japan, and India. It also introduced minor people, campaigns, maps, and game modes.

Age of Empires III: The Asian Dynasties for PC was released in North America on October 23, 2007. The Mac version was released on August 5, 2008. The game was generally received well by critics, mostly praising graphics, and sometimes criticizing predictable aspects of the game. It earned a 79% score on GameRankings and an 81% on Metacritic.

The gameplay of Age of Empires III: The Asian Dynasties followed a similar format to the original game, Age of Empires III. Rather than introduce new methods of gameplay, most changes were focused on introducing new content to the game.

Export is a special resource, only available to the three Asian civilizations, and is used to hire foreign troops and research technologies from the consulate, where the player can choose a foreign ally or, for the Japanese, isolationism. Export is generated automatically when the villagers are gathering, but its gather rate is much slower than other resources, making it challenging to afford a large foreign army. Export Rate / Experience points are also generated by other means (like sacred cows for Indians) and are specific to each civilization.

In developing Age of Empires III: The Asian Dynasties, Ensemble Studios worked with Big Huge Games for the first time. This partnership came about as a result of Ensemble Studios being busy with other projects including Halo Wars, and Big Huge Games' real-time strategy team with spare time on their hands. Several Big Huge Games employees, including Brian Reynolds, had declared they were fans of the Age of Empires series, and thus they asked Ensemble Studios if the two could work together on the upcoming expansion. The two studios did large amounts of communication through the internet, and Reynolds says the entire process worked well. Ensemble Studios took the role of the "customer" in their relationship with Big Huge Games, and thus the game was designed to satisfy Ensemble's needs. Ensemble designers Greg Street and Sandy Petersen were also heavily involved in brainstorming and developing the game.

A demo version of Age of Empires III: The Asian Dynasties was released on October 4, 2007. The demo featured the Japanese civilization, the Honshū random map, and the Supremacy game mode.

IGN praised the graphics in Age of Empires III: The Asian Dynasties, noting the graphics engine used in the game was strong enough to support the game; able to "render high-level battlefield action and ground-level cinematics easily". GameSpot agreed, approving of the added "visual pizzazz" in the form of Wonders, buildings, and units. The greatest praise came from GameSpy though; reviewer Tom Chick described the "gorgeous pagodas, arches, minarets and colors" as "a rare and generous package of new visuals". IGN called the game's voice acting "great", also praising the "livelike" sounds of the characters. GameSpot disagreed, complaining that the audio was overly similar to past games in the series.

The gameplay generally received praise from reviewers, with some caveats. While IGN's Steve Butts "loved" the game's new units and operations, he complained of a predictability in the missions, asking for more surprises. GameSpot's Jason Ocampo agreed, noting that the "campaigns feature familiar plot twists", while praising the "new twists" on the Age of Empires series-style gameplay. GameSpy noted that some of the changes were well overdue. However, the gameplay was given a big ticket, with the hypothetical question posed; "Ever play an expansion or sequel and then realize you can never go back to its predecessor because you've been spoiled by the new?"