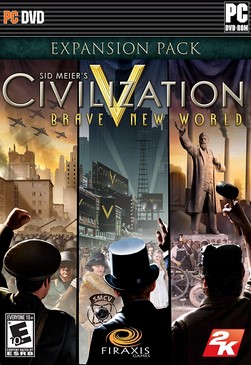 Sid Meier's Civilization V: Brave New World is the second official expansion pack for the turn-based strategy video game Civilization V. It was released on July 9, 2013 in North America, and on July 12, 2013 in the rest of the world.

The expansion adds nine Civilizations, eight Wonders (the Parthenon, Broadway, Globe Theatre, Borobudur, the Uffizi, the Red Fort, Prora and the International Space Station), eight buildings, twenty units such as the Winged Hussars and Zulu Impi, two scenarios (American Civil War and Scramble for Africa), a new Trade Route system using Caravans and Cargo Ships trade units, Ideologies, the World Congress which expands the diplomatic aspect of the game, and an improved Cultural Victory including Tourism, Archaeology and a Great Work mechanic to the core-game. Thus the Great Artist has changed a lot with the features above, along with Great Musician and Great Writer. The expansion pack includes and expands on all of the mechanics of Gods & Kings. Brave New World reintroduces Christianity to split into three religion branches, Catholicism, Eastern Orthodoxy and Protestantism.

Social policies have been overhauled in Brave New World, with the introduction of the new ideology system. Once the player either reaches the Modern era or finishes three factories, he or she will have to choose an ideology to continue the game. There are three ideologies available to choose, all of which were formerly the Industrial era social policies: Order, Freedom, and Autocracy. Each ideology has 16 unique tenets, which are unlocked and feature bonuses similarly to social policies in the core game. Two new social policy trees were added to replace the old policies becoming ideologies. Aesthetics focuses on culture while Exploration focuses on naval activities. In addition, the Piety policy tree has been updated so that it now deals entirely with religion.

The diplomatic gameplay aspect has been improved in the expansion. With the introduction of the world congress, beginning in the Renaissance era upon one civilization discovering printing press and meeting every other civilization, proposals can be voted on that influence the conditions within the world, trade embargoes, as well as world activities such as the World's fair. In order to achieve the diplomatic victory, one must be voted the world leader at a World Congress meeting.

In addition, The Statue of Zeus, previously released in the Seven Wonders of the Ancient World DLC, is included in the game.

Brave New World adds nine playable civilizations and leaders: Casimir III of Poland, Ashurbanipal of Assyria, Pedro II of Brazil, Shaka of the Zulus, Maria I of Portugal, Gajah Mada of Indonesia, Ahmad al-Mansur of Morocco, Enrico Dandolo of Venice, and Pocatello of the Shoshone. Additionally, Haile Selassie of Ethiopia, previously released in the first expansion, is included along with the nine new civilizations for those who did not purchase Gods & Kings.

The developers stated that they wanted to include civilizations from parts of the world less commonly represented, namely Africa (Zulu, Morocco) and South America (Brazil). Other new civilizations were added to provide players with a more "interesting gameplay experience", many of them showcasing the gameplay features new to Brave New World; for example, players as Portugal or Venice are encouraged to make use of the new trading route system.