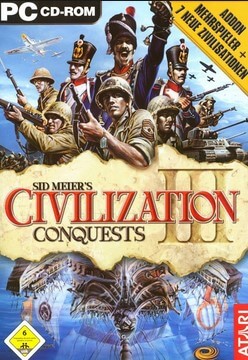 A new feature introduced was called scenarios, which were intended for multiplayer gaming. The scenarios are shorter than the main game, take less time to finish, and mainly focus on a specific period in history.

Nine "Conquests," or scenarios, were added to this game. They were: Mesopotamia, the Rise of Rome, the Fall of Rome, the Middle Ages in Europe, Mesoamerica, the Age of Discovery, the Napoleonic Wars, the Sengoku period in Japan, and the Pacific Theater of World War II.

Conquests was the second and final expansion. In 2004, Civilization III: Complete was released, compiling the base game and both expansions into one package.