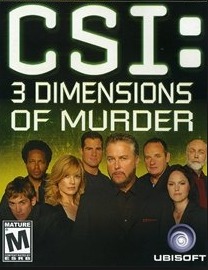 CSI: 3 Dimensions of Murder is a computer game based on the CSI: Crime Scene Investigation television series. Unlike the previous CSI games, this game was developed by Telltale Games, rather than 369 Interactive. It was published by Ubisoft, and was released for Microsoft Windows in March 2006.

The game uses a new 3D engine, which changes the gameplay and graphical look of the game, in comparison to 369 Interactive's CSI games.

This game, like the previous CSI games CSI: Crime Scene Investigation and CSI: Miami, follows a distinct pattern of five cases, with the fifth case tying together the previous four.

A PlayStation 2 version of this game was released on the September 25, 2007 in the United States. This version was made by Ubisoft's studio in Sofia, Bulgaria. The PlayStation 2 version is not the same as the Microsoft Windows version. The player has free movement and control of the view, which was required by Sony America. This change created extraordinary difficulties for the developer.

Case 1: Pictures at an Execution

A rich out-of-towner is bludgeoned to death in a posh art gallery the day before her wedding. The suspected murder weapon? An expensive hawk statue that's flown the coop. You work with Warrick Brown on this case. The evidence points to her hot-tempered fiancé, the owner of the art gallery, and a reclusive artist commissioned to paint a portrait of the victim.

The CEO of a video game company on the verge of a high-profile release is shot dead at the biggest gaming trade show of the year. Life imitating art, or something more sinister? The only suspects are a marketing woman, who was trained with guns as a child, another co-worker, also his roommate, and an old worker, who might've gave the guy a good swing. The player works with Nick Stokes on this case

This case is a dramaticized, humorous send-up of the cancellation and subsequent fan reaction surrounding Sam & Max: Freelance Police, a game many Telltale employees had worked on pre-cancellation.

The 3 Dimensions of Murder demo features a portion of this case.

A casino heiress has been victimized in her apartment. The crime scene is crawling with blood spatters, fibers, and fingerprints — all that's missing is the body. The only suspects are the victim's twin sister, her abusing fiancé, and a mysterious male nurse. In this case the player works with Sara Sidle.

The son of a prominent real estate developer is found dead in a remote area of the Nevada desert. Is he a victim of poison, politics, or promiscuity? Evidence points to his wife, his wealthy mother, and a sleazy contractor. You work with Greg Sanders on this case.

A sleazy private investigator has been shot to death in an alley, the body is found by one of CSI's own, Doc Robbins. Retracing his final steps reveals a web of deceit, lies, and corruption. Who — and how many — pulled the trigger? You work with Gil Grissom and Catherine Willows on this case. This case ties the first, and third cases together.

A casino waitress is found stabbed in her home, and is rushed to the hospital, where she survives. It is found out in the investigation that she is pregnant, and later miscarries, the child of a prominent Texas oil man, who happens to be in town for the week, with his young wife. Did he stab the victim, did the wife do it, or did the victim's live-in boyfriend do it? You work with Catherine Willows on this case.

Note: This game is Case 2 in CSI: Hard Evidence.

The game was met with mixed reception. GameRankings and Metacritic gave it a score of 69% and 67 out of 100 for the PC version, and 58% and 58 out of 100 for the PlayStation 2 version. The game's global sales combined with those of its two predecessors—CSI: Dark Motives and CSI: Crime Scene Investigation—reached roughly 2.4 million copies across all platforms by December 2006.